Shares
Answering reporters' questions, White House Spokesman Josh Earnest commented on some of the statements made by President Putin during the traditional "direct line". 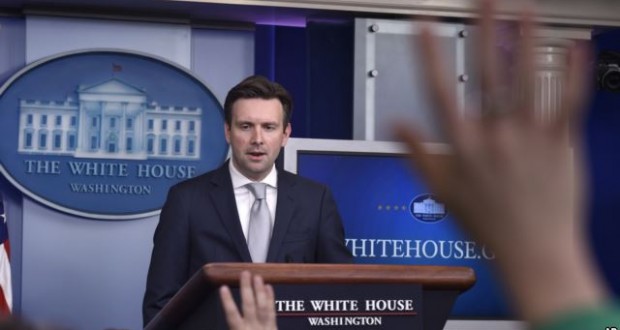 Ernest was asked what the White House thought of the statement made by Russian President Vladimir Putin wanting the West treating Russia as an equal partner. Earnest said that " We have acknowledged on a number of occasions that Russia played an important role alongside the P5+1 in our negotiations with Iran to try to carve a diplomatic pathway that would prevent Iran from developing a nuclear weapon," Joinfo.ua reports with reference to Voice of America.

"Russia played a constructive role in this process, and if you remember, even at the beginning of this week, the Russian Foreign Ministry issued a useful statement, reporting that the document outlining the parameters of the political framework agreement, announced two weeks ago is consistent with the agreement reached at the negotiating table," said Ernest about Iran.

Also, adding that Russia had assisted in other situations, such as in the negotiation process and the destruction of the Syrian arsenal of chemical weapons, Ernest said:

"What's also true is that there are expectations for influential world powers. One of those expectations is that they are going to respect the borders of sovereign countries. And now we see how over the last year the Russian government had flagrantly violated the sovereignty of the Ukrainian people. And we have witnessed the Russian military acting in the east of Ukraine, supporting the separatists. This is not consistent with the behavior that is expected from the world power."