Shares
Students from Russia staged a provocation near the White House in Washington, calling it "video installation." 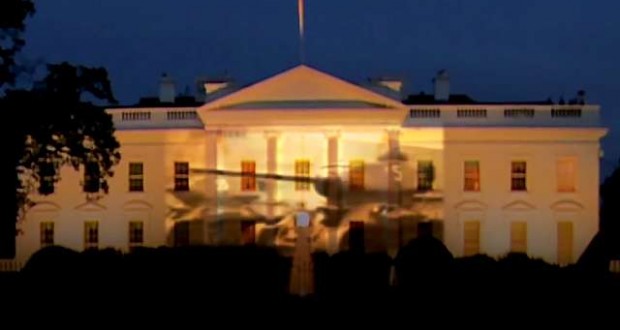 Thus, Russian students in the United States projected a video with Russian tanks and Russian flag on the facade of the White House. Russian media proudly reported that such a provocation was staged by the students of the Russian cinematography school, Joinfo.ua reports.

They projected the Russian flag and the images with military equipment on the walls of the White House. The students called this technique "polite tanks."

At the beginning of the video there is annotation, which states that Obama "has forbidden many world leaders to visit Moscow Victory Day Parade and refused to come himself."

That is why the Russian high-tech "vatniks" held a parade in Washington.

"If Barack doesn't go to Moscow Victory Day Parade, the Parade will go to Barak," the students say.

So far, it is unknown how Washington police reacted to such a provocation. But according to U.S. law, any actions against the residence of the President are considered a crime. That is why, perhaps, the movie lasts only a minute. Showed and run away.

But the fact that the inhabitants of Washington were shocked is true.

Meanwhile, in Russia such installation on the Kremlin's walls would lead to imprisonment for extremism.