Shares
For the first time in half a century the United States and Cuba open their diplomatic missions - embassies - in Havana and Washington. 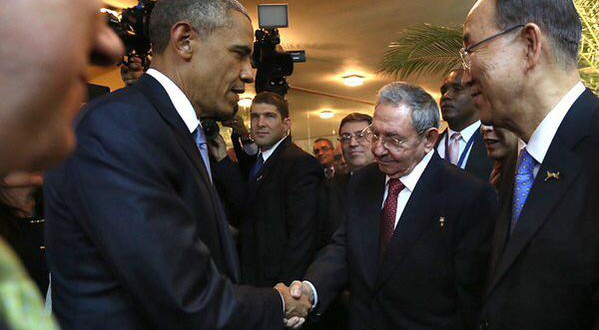 For the first time in half a century the United States and Cuba open their diplomatic missions – embassies – in Havana and Washington, Joinfo.ua reports with reference to the foreign press.

The relations between the two countries were frozen in the early 1960s, when the United States severed diplomatic relations with Cuba and introduced the embargo on trade with the country.

The Cuban leader Raul Castro called the resumption of diplomatic relations a symbolic step of the beginning of a long and difficult road to normalization.

John Kirby, the U.S. State Department spokesman, said that there were still issues on which the parties had not reached a compromise.

In Washington, the U.S. Secretary of State John Kerry will meet with his Cuban counterpart Bruno Rodriguez. From now on, “the missions of interests” in the United States and Cuba will be replaced by fully-fledged embassies.

Since 1977, in the two countries there had operated diplomatic missions called “the missions of interests” of the U.S. and Cuba. They operated under the auspices of Switzerland, but had not had the status of an embassy.

Recently, the U.S. started improving the relations with the countries, which were previously hostile to the States. Late last year, the presidents of the U.S. and Cuba announced the resumption of diplomatic relations after a 50-year break. Now, these statements were supported by concrete steps.

In December, Barack Obama decided to exclude Cuba from the list of countries sponsoring terrorism. There was also announced the plan to restore the ferry and air communication between the countries.

So far, the trade embargo is still in effect – the majority of the U.S. companies are barred from doing business in Cuba.