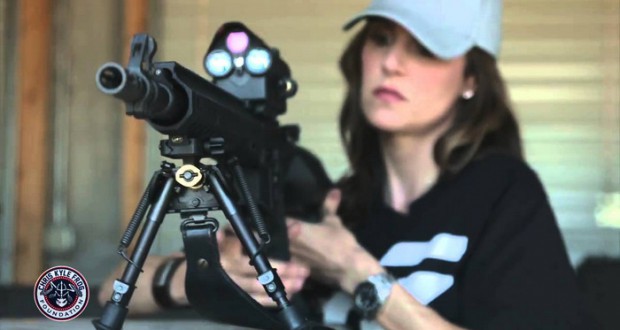 Taya Kyle is the widow of Chris Kyle, the most deadly sniper in US history. Since his death in 2013, Taya has tried to uphold his legacy. She founded the Chris Kyle Frog Foundation in 2014 to provide support for military families, and she’s worked as a tireless advocate for those who have lost loved ones in war, Joinfo.ua reports with the reference to Outdoorhub.com.

On December5, 2015, Taya will test sniper complex Precision Guided in the American Sniper Shootout, facing one of the best competitive shooters in the world. Her opponent will be Bruce Piatt, who is still fresh off his win in the NRA’s 2015 World Shooting Championship.

Taya will be equipped with state-of-the-art rifles from TrackingPoint, a company famous for its patented Precision-Guided Firearms (PGFs). The company says that its sophisticated optics and rifles will make anyone as accurate as a master sniper, and that hitting a target is as simple as marking it and pulling the trigger.

Proceeds from the American Sniper Shootout will go toward the Chris Kyle Frog Foundation, regardless of who wins, but Taya says that’s not the only reason she will be participating in the challenge. In an interview with OutdoorHub, Taya argued that the TrackingPoint rifles are not only a huge leap in firearms technology, they may also save lives.