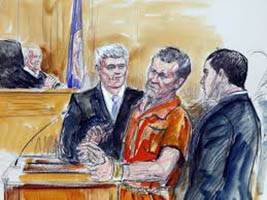 A Russian jihadist Irek Hamidullin, wounded and captured by American soldiers during an insurgent attack in Afghanistan in November 2009, was sentenced to life plus 30 years in prison Thursday, Richmond Times-Dispatch reports.

Irek Hamidullin, 56 years old, was convicted in a groundbreaking federal trial in Richmond earlier this year on 15 charges including providing material support to terrorists and attempting to destroy the U.S. military aircraft.

The former Russian soldier turned Jihadist led an attack by Taliban-related insurgents against an Afghan Border Police camp near the Pakistan border in November 2009. All the attackers but Hamidullin were killed. Hamidullin, wounded and captured by American soldiers, was held at the Bagram U.S. Air Force Base in Afghanistan for five years, implicating himself in statements to the FBI.

The judge said one of his major concerns was a statement Hamidullin made to an FBI agent: “‘If I see you on the street, I (will) have to kill you as an infidel.'”

Hamidullin, a thin man wearing an orange jail jump suit, later said that was a lie. “You accuse me of terrorism, that is a lie.”