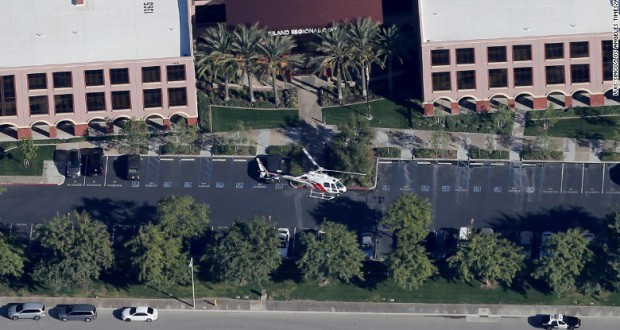 The mass shooting in San Bernardino, California, is now being investigated as “an act of terrorism,” according to the FBI official David Bowdich.

David Bowdich said that some phone conversations between at least one of the shooters and other people are being investigated.

It has become known today that Tashfeen Malik, the female shooter in the Wednesday massacre that left 14 dead and 21 wounded, posted on her Facebook page about her allegiance to ISIS leader Abu Bakr al-Baghdadi during the shooting.

Malik’s post was made on an account with a different name, one U.S. official said. The officials did not explain how they knew Malik made the post.

A Facebook official told CNN that a post that went up about 11 a.m. Wednesday that violated the company’s community standards that prohibit the promotion of terrorism or the glorification of violence. It was taken down Thursday.

A law enforcement official said it appeared that the mass shooting may have been inspired by ISIS.

But none of the officials said that ISIS directed or ordered the attack. ISIS has called for people worldwide to launch attacks in its name, but isn’t known to have claimed credit for what happened in San Bernardino.

Malik and her husband, Syed Rizwan Farook, burst into a holiday party for the environmental health department he worked for and opened fire. They were killed elsewhere in a shootout with police.

No one has been arrested in connection with the massacre, but authorities say it is a possibility.