Shares
ISIS’ radio station hail Tashfeen Malik and Syed Rizwan Farook as "supporters", but did not confirm they were the members of the group 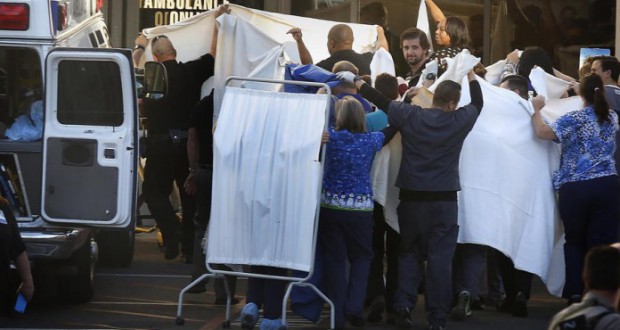 On Saturday, ISIS’ al-Bayan Radio station declared: “We pray to God to accept them as martyrs.” But they did not say that Tashfeen Malik and Syed Rizwan Farook were members or that ISIS was responsible, CNN reports.

Yesterday, Tashfeen Malik, the female shooter in the Wednesday massacre, that left 14 dead and 21 wounded, posted on her Facebook page about her allegiance to ISIS leader Abu Bakr al-Baghdadi during the shooting.

Since yesterday, the FBI has been investigating the massacre in Southern California as an “act of terrorism.”

The couple’s motivation for the attack is a key focus for investigators. But ISIS’ acknowledgment of Malik and Farook as supporters doesn’t mean they were members or that someone from the group ordered it, said retired Air Force Lt. Col. Rick Francona, a CNN military analyst and a former intelligence officer.

ISIS, when claiming responsibility for other terrorist attacks, would call attackers “knights” or “soldiers” rather than supporters. It has, however, urged sympathizers to carry out attacks on their own.

“What they’re calling these two are supporters, which is kind of a lesser level,” indicating it might not have had direct contact with the couple, Francona said.

Tashfeen Malik and her husband, Syed Rizwan Farook, sprayed bullets at Farook’s co-workers at a holiday party for the environmental health department in San Bernardino before being gunned down in a shootout with authorities the same day.