Home / US / US East Coast prepares for powerful snowstorm

Shares
US East Coast prepares for the first storm in 2016 named Jonas, which will affect about 75 million people this weekend 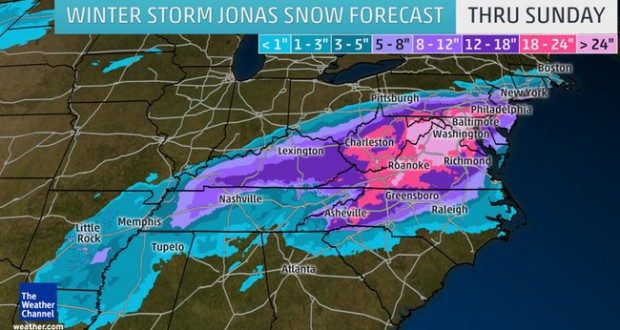 Washington D.C., New York and other East Coast cities readied fleets of snow plows, thousands of flights were canceled or delayed and residents stocked up on groceries ahead of a winter storm expected to dump up to 30 inches (76 cm) of snow on the region, Reuters reports.

At least five states had declared emergencies by Thursday afternoon, as the season’s first major Atlantic Coast storm started to move over the Mid-South before barreling on an expected north and eastward course bringing up to two feet of snow to some areas.

Blizzard warnings were out in the nation’s capital and Baltimore, with extreme conditions expected to begin on Friday afternoon, while New York City was under a blizzard watch for Saturday morning.

The Washington Metropolitan Area Transit Authority, which includes the second-busiest U.S. subway system, said it would suspend operations from late on Friday through Sunday.

“We’ve had bitterly cold weather this week and snow is in the forecast, so we want New Yorkers to make sure they’re fully prepared for all that winter may bring,” Emergency Management Commissioner Joseph Esposito said in a statement.

In Washington, Mayor Muriel Bowser tweeted that more than 2,000 residents have joined the city’s Resident Snow Team to help elderly and disabled neighbors shovel out after the storm. Bowser said also that public schools would be shut on Friday.

A blizzard watch is in effect for the Washington, D.C., and Baltimore region for Friday and Saturday. “Heavy snow and blowing snow will cause dangerous conditions and will be a threat to life and property,” the weather service warned Wednesday.

Federal employees in the Washington area were told their offices would close at noon to let them go home early.

Grocery store shelves were being stripped of bread, milk and other essentials as residents prepared to hunker down for a wintry weekend. Consumer watchdogs warned against illegal price gouging for such essentials as generators, batteries, flashlights and hotel lodging.

Airlines began cancelling Friday and Saturday flights, with many of the more than 2,400 cancellations for Friday at Washington and North Carolina airports, according to FlightAware.com.

The National Weather Service said blizzard conditions could be life-threatening across much of the mid-Atlantic on Friday night and early Saturday.

Governors in Virginia, Maryland, North Carolina and Pennsylvania joined Bowser in declaring states of emergency, and the governor of West Virginia declared a state of preparedness.