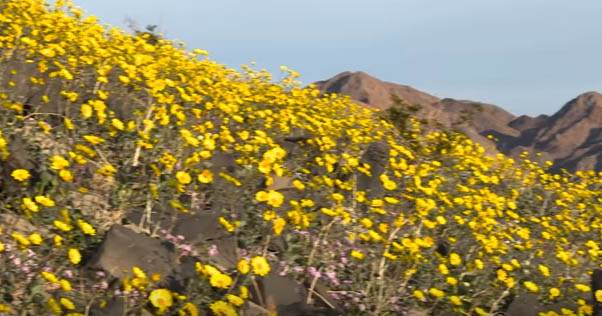 Parts of Death Valley, the driest place in North America, have exploded in a riot of color with a rare “superbloom” of millions of wildflowers, the Guardian reports.

The unusual spectacle, unofficially dubbed a superbloom, has been triggered by a series of storms in October that brought heavy rainfall to parts of the park, including a burst of 3in of rain in just five hours. Death Valley normally averages just 2in of rain a year.

This rainfall, which the National Park Service has attributed to El Niño conditions that have soaked parts of California, has transformed a landscape that has a beauty usually considered a little more stark, featuring salt flats, sand dunes and scrub.

“The hills and alluvial fans that normally have just rocks and gravel are transformed by huge swaths of yellow, white, pink and purple,” said Alan Van Valkenburg, a Death Valley national park ranger. “At first glance you are blown away by the sheer numbers of flowers, then on closer inspection the diversity of species will draw you in.”

In October 2015 Atacama Desert in Chile, one of the driest places on Earth, was also covered in a multitude of flowers after heavy rains.