Shares
U.S. President Barack Obama also said that Russian President Vladimir Putin is "constantly interested in being seen as our peer and as working with us, because he's not completely stupid" 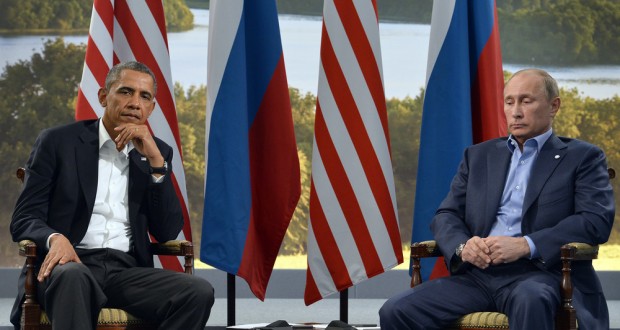 U.S. President Barack Obama said in one of interviews published on March 10 that the fact that Russian President Vladimir Putin “invades Crimea or is trying to prop up Assad doesn’t suddenly make him a player,” Joinfo.ua reports with reference to RFERL.

Obama said he was “very proud” when U.S. Secretary of State John Kerry and Russian Foreign Minister Sergei Lavrov worked out a plan for the removal of most of Syria’s chemical weapons.

“The overwhelming weight of conventional wisdom and the machinery of our national-security apparatus had gone fairly far. The perception was that my credibility was at stake, that America’s credibility was at stake,” Obama said.”And for me to press the pause button at that moment…to pull back from the immediate pressure and think through in my own mind what was in America’s interest, not only with respect to Syria but also with respect to our democracy, was as tough a decision as I’ve made.”

“I believe ultimately it was the right decision to make,” he said.

Obama also said that Putin is “constantly interested in being seen as our peer and as working with us, because he’s not completely stupid.”

Putin “understands that Russia’s overall position in the world is significantly diminished,” he said. “And the fact that he invades Crimea or is trying to prop up Assad doesn’t suddenly make him a player.”

Obama said that in both Ukraine and Syria, Putin acted “in response to a client state that was about to slip out of his grasp” and “improvised” a way to maintain control — but that in Syria, this came at enormous cost to the well-being of his own country.”

“And the notion that somehow Russia is in a stronger position now, in Syria or in Ukraine, than they were before they invaded Ukraine or before he had to deploy military forces to Syria is to fundamentally misunderstand the nature of power in foreign affairs or in the world generally,” he said. “Real power means you can get what you want without having to exert violence.

As it was reported earlier, Obama also said that Ukraine “is going to be vulnerable to military domination by Russia no matter what” the United States does.