Shares
The U.S. insists on introducing amendments to Ukraine's Constitution, pressing for the so-called special status of the militant-occupied areas in Ukraine's Donetsk and Luhansk regions, militant amnesty, local elections in July, according to the press service of the Ukrainian Samopomich Party 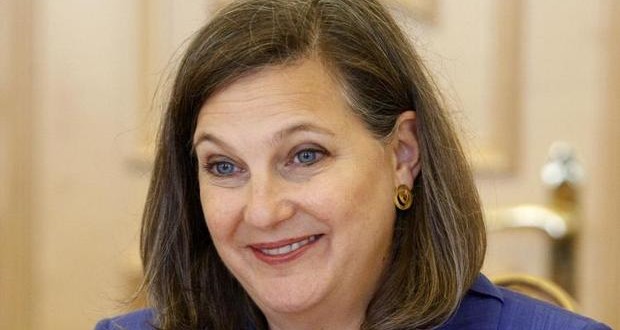 U.S. Assistant Secretary for European and Eurasian Affairs Nuland, who arrived in Kyiv on Monday, announced these key messages at a meeting with representatives of the Ukrainian parliament’s factions on Tuesday, says representative of the Samopomich’s faction Victoria Voytsitska, who was present at the meeting, UNIAN reports.

“The U.S. Department of State insists on Ukraine’s introducing amendments to the Constitution, [legalizing] the special status of the occupied territory in Donetsk and Luhansk regions, holding local elections in the occupied areas in the near future and granting amnesty for militants. The Minsk agreements should be implemented by the end of 2016, and there is no alternative to them,” the Ukrainian MP cited Nuland.

“We should be aware that no one is going to withdraw heavy weapons,” Voytsitska said.

“The heavy weapons should be locked and its storage should be monitored by the OSCE Special Monitoring Mission. We are told that if we conduct the [local] elections in Donbas, this would set a precedent when Russian troops are voluntarily leaving the occupied territory for the first time in history. And no guarantees are given that the Russian forces leave,” she added.

Samopomich says that if Ukraine demonstrates its good will in implementing the Minsk agreements and adopts a law on local elections in occupied territory in May, anti-Russian sanctions will be prolonged in the best case for another nine months until January 2017.

“The elections in occupied territory are expected as early as this July – these are the key messages,” Samopomich said.

Voytsitska draws unpromising conclusions: the cancellation of the sanctions against Russia are pegged to the amendments to Ukraine’s constitution and the elections in Russian-occupied territory rather than to the unlawful annexation of Crimea and Russian occupation in Donbas.

Samopomich insists that Ukraine should designate the territories as the occupied ones and Russia as an occupier country, irrespective of extending or rolling back international sanctions against that country.

The demands put forth by the United States on Donbas’ special status and the local election is “an actual capitulation – this is what the Kremlin wanted by waging war on Ukraine,” Samopomich said.