US President lifts embargo on lethal arms sales to Vietnam

Shares
President Barack Obama has announced the US is fully lifting its embargo on sales of lethal weapons to Vietnam, its one-time enemy. 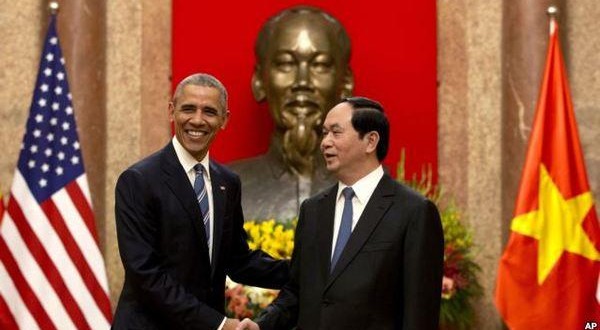 Speaking during a visit to communist Vietnam and talks with its leaders, the US President Barack Obama said the move removed a “lingering vestige of the Cold War”, BBC reports.

The US is trying to bolster its relationship with its Pacific allies, as China asserts territorial claims.

But President Obama said the embargo decision was not related to US policy on China.

“It’s based on our desire to complete what has been a lengthy process of moving towards normalisation with Vietnam,” he said in Hanoi.

Vietnam is one of several countries in the region involved in maritime disputes with China. The US insists on the right to freedom of navigation in the South China Sea.

In 2014, a row over a Chinese oil rig near the Paracel islands led to clashes between Chinese and Vietnamese vessels and anti-China riots in Vietnam.

White House officials had indicated the arms ban, in force since 1984, would be lifted only if human rights in Vietnam improved.

“Sales will need to still meet strict requirements, including those related to human rights, but this change will ensure that Vietnam has access to the equipment it needs to defend itself,” Mr Obama said after talks with President Tran Dai Quang.

Vietnam had been arguing for an end to the embargo, which was partially lifted in 2014.