Home / US / U.S. probing whether anyone helped gunman in Orlando rampage

U.S. probing whether anyone helped gunman in Orlando rampage

Shares
U.S. law enforcement officials investigated on Monday whether anyone helped the gunman who massacred 49 people at a gay nightclub in Orlando, but said they did not believe anyone connected to the shooting posed a current danger to the public. 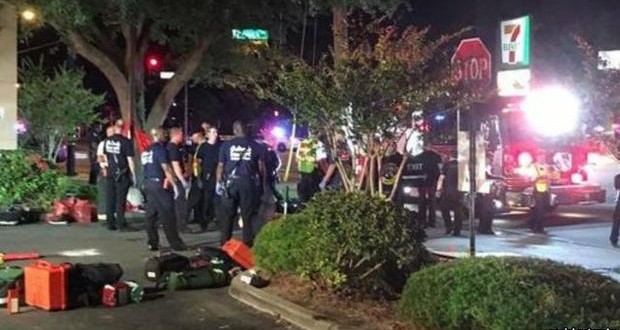 The FBI and other agencies were poring over evidence inside and in the closed-off streets around Orlando’s Pulse nightclub, where a shooter pledging allegiance to Islamic State carried out the deadliest mass shooting in U.S. history, Reuters reports.

The gunman, Omar Mateen, a New York-born Florida resident and U.S. citizen who was the son of Afghan immigrants, was shot and killed by police who stormed the club early Sunday morning with armored cars after a three-hour siege.

Officials said on Sunday the death toll was 50. On Monday they clarified that this included Mateen, who was killed by police.

Law enforcement officials were looking for clues as to whether anyone worked with Mateen on the attack, said Lee Bentley, U.S. Attorney for Florida’s middle district.

“There is an investigation of other persons, we are working as diligently as we can on that,” Bentley told a news conference. “If anyone else was involved in this crime, they will be prosecuted.”

Officials emphasized that they believed there had been no other attackers and that they had no evidence of a threat to the public.

Mateen, 29, called emergency services during the shooting and pledged allegiance to the leader of the militant Islamic State group, officials said. His father said on Sunday his son was not radicalized, but indicated Mateen had strong anti-gay feelings. His ex-wife described him as mentally unstable and violent toward her.

Islamic State reiterated on Monday a claim of responsibility for the attack.

“One of the Caliphate’s soldiers in America carried out a security invasion where he was able to enter a crusader gathering at a nightclub for homosexuals in Orlando,” the group said in a broadcast on its Albayan Radio

Although the group claimed responsibility, this did not necessarily mean it directed the attack: there was nothing in the claim indicating coordination between the gunman and Islamic State before the rampage.

The attack, denounced by President Barack Obama as an act of terror and hate, reignited the debate over how best to confront violent Islamist militancy, a top issue in the Nov. 8 U.S. presidential election campaign. Democratic candidate Hillary Clinton and her Republican rival Donald Trump both addressed the issue on Monday.

Trump has made it a centerpiece of his campaign to get tougher on security and has proposed a temporary ban on Muslims entering the country. He told Fox News on Monday that the United States should increase its military campaign against Islamic State militants, who hold land in Syria and Iraq, in response to the shooting.

The rampage began just after 2 a.m. on Sunday at the crowded Pulse nightclub in the heart of Orlando, about 15 miles (25 km) northeast of the Walt Disney World Resort. Orlando is one of the most popular tourist destinations in the United States, drawing some 62 million visitors a year.

Some 350 patrons were attending a Latin music event at the club and survivors described scenes of carnage and pandemonium as the shooter took hostages inside a bathroom.