Home / US / Thousands protest against Trump victory across the USA

Thousands protest against Trump victory across the USA

Shares
Protesters took to the streets Wednesday in at least 10 cities to march against president-elect Donald Trump - and numerous college students and faculty leaders took to social media to announce support groups and even postponed exams, according to USA Today. 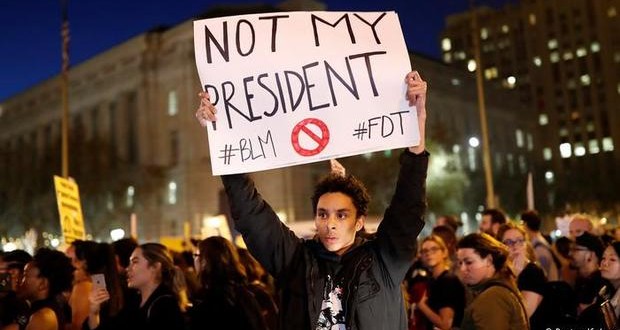 Police in riot gear struggled to hold back scores of protesters in some of the cities as protesters chanted “Not My President” and “No Racist USA.” The protests were mostly peaceful. Seattle police said they were investigating a report of a shooting near the site of the protest in that city, but it may not have involved protesters.

In Los Angeles, protesters poured into the streets near City Hall and torched a giant Trump effigy, the Los Angeles Times reported. Later in the night, hundreds marched onto the busy 101 Freeway which brought the highway to a complete standstill. The California Highway Patrol and the Los Angeles Police Department —who urged protesters to remain lawful and peaceful — responded and were seen leading demonstrators away from the busy highway.  At least 13 people were later arrested, LAPD Officer Tony Im told the Los Angeles Times.

In Washington, D.C., hundreds took to the streets carrying signs saying “Nasty Women Fight Back” and “White Males for Equality for All.”

The unrest culminated when two separate anti-Trump demonstrations converged in front of the Trump International Hotel. They chanted and yelled “Impeach Donald Trump” and toward the end yelled at police officers who stood guard at the hotel entrance.

In New York, thousands of demonstrators blocked off streets around Trump Tower near the busy intersection of 57th Street and Fifth Avenue.

In Chicago, several hundreds of protesters gathered near the Trump International Hotel and Tower to express their displeasure with the president-elect.

In Oregon, dozens of people blocked traffic in downtown Portland, burned American flags and forced a delay for trains on two light-rail lines. Trump supporters taunted the demonstrators with signs. At one point, a lone Trump supporter was chased across Pioneer Courthouse Square and hit in the back with a skateboard before others intervened.

Across the country, universities and even a few high schools organized post-election civil disobedience of a different sort. Some teachers sent notes to students postponing tests and offering support. Student unions offered sessions of meditation, discussions and tea.