Home / US / Second day of anti-Trump protests across US, Portland police declared demonstration is “riot”

Second day of anti-Trump protests across US, Portland police declared demonstration is “riot”

Shares
For the second day in a row, thousands of protesters took to the streets across the country Thursday even as President-elect Donald Trump and President Barack Obama sought to set an example by striking a more conciliatory tone in their first meeting since the election. 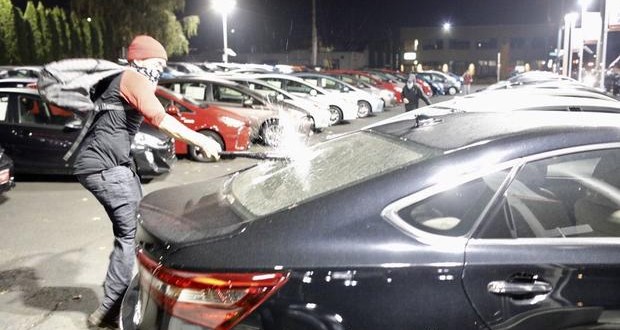 Trump himself blamed the demonstrations on “professional protesters incited by the media,” Joinfo.com reports with reference to NBC news. Earlier, Obama called Trump’s recent tone during their meeting at the White House “reassuring,” but some Americans don’t seem to feel that way.

“We’ve seen a rash of hate crimes, of hate rhetoric, racist graffiti in campuses around the country. We have seen Klan literature drops, we have seen that suicide hotlines are ringing off the hook, and we are hearing of very extensive bullying in and around schools,” said Mark Potok, a senior fellow at the Southern Poverty Law Center, a nonprofit civil rights activist group. “It’s really very extraordinary.”

In New York people took to the streets in droves asking the country to “join” them. While demonstrations were peaceful for the most part, scattered arrests were made in California and Chicago.

In other cities Thursday: