Home / US / At least 9 dead, 25 missing in California warehouse fire

Shares
At least nine people are dead and 25 people are unaccounted for after a fire broke out late Friday at a warehouse in Oakland, California, according to fire department officials. 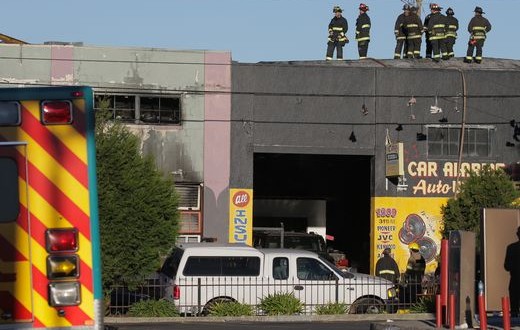 The blaze broke out during a Friday night electronic music party at the warehouse in Oakland, California, which is the home of an artists collective, USA Today reports.

Oakland Fire Chief Teresa Deloach Reed told reporters that there were nine confirmed fatalities, with most of the dead found on the second floor of the building in the city’s Fruitvale district, but she feared the death toll could rise. She said it took about five hours to put out the blaze in the building, which did not have sprinklers.

On Saturday morning, fire officials’ search of the building was stymied when the roof of the warehouse collapsed.

“One of the issues was that leading up to the second floor there was only one way up and down,” Reed told reporters. “It was my understanding that the stairwell was kind of makeshift, that they put it together with pallets.”

One witness who escaped the blaze, Bob Mule, told the East Bay Times that a friend hurt himself and asked for help getting out. Mule said he tried, but couldn’t do it.

“It was too hot, too much smoke; I had to get out of there,” said Mule, a photographer and artist who lives in the building and suffered minor burns. “I literally felt my skin peeling and my lungs being suffocated by smoke. I couldn’t get the fire extinguisher to work.”

About 50 people are believed to have been inside the building at the time of the blaze, according to fire department officials.

An electronic-music party dubbed Golden Donna 100% Silk was set for the warehouse Friday night. Friends and family took to social media Saturday to post and seek information on loved ones who might have been there.

“There is still a lot of rubble that needs to be searched,” Reed said. “And as we continue to search the building, I pray that fatality count does not go up, but I believe there is a potential for it to.”