Shares
Tillerson's experience in diplomacy stems from making deals with foreign countries for the world's largest energy company, although questions have been raised about his relations with Russia. 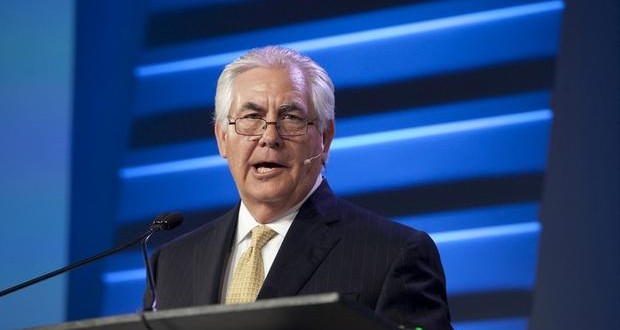 President-elect of the US Donald Trump has chosen Exxon-Mobil Corp’s Rex Tillerson as his choice for secretary of state on Tuesday, praising him as a successful international dealmaker who has led a global operation, Joinfo.com reports with reference to Reuters.

“He will be a forceful and clear-eyed advocate for America’s vital national interests, and help reverse years of misguided foreign policies and actions that have weakened America’s security and standing in the world,” Trump said in a statement.

Tillerson said he shared Trump’s “vision for restoring the credibility of the United States’ foreign relations and advancing our country’s national security.”

Their support is seen as key to helping Tillerson get past a possibly contentious Senate confirmation battle likely to focus on his relationship with Russian President Vladimir Putin.

In 2013, Putin bestowed a Russian state honor, the Order of Friendship, on Tillerson, citing his work “strengthening cooperation in the energy sector”.

Trump judged in making the pick that Tillerson could adequately address questions about his relations with Russia, an official said.

Republicans and Democrats said Tillerson, who is president of Exxon Mobil Corp, would be asked about his contacts with Russia, having met Putin several times. He won fresh praise from Moscow on Monday.

Senator John McCain, a leading foreign policy voice and the 2008 Republican candidate for president, told Reuters in an interview: “I have concerns. It’s very well known that he has a very close relationship with Vladimir Putin.”

There has been controversy over the role alleged Russian cyber hacking may have had on the outcome of the Nov. 8 presidential election, in which Trump defeated Democrat Hillary Clinton.