Toddler miraculously saves his twin brother from under fallen dresser

Shares
A 2-year-old boy in Utah saved his brother, who was stuck under a dresser that tipped over. 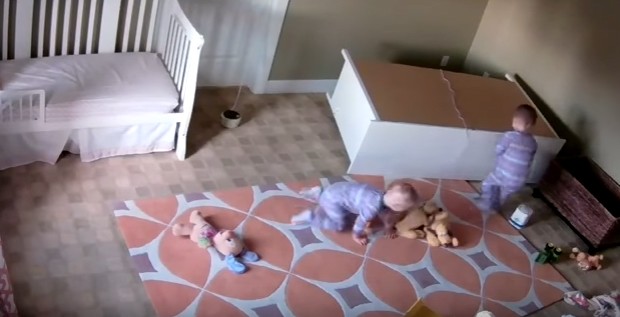 Twin’s father Ricky Shoff posted a video of the incident, captured from a bedroom security camera, as News Channel 3 reports.

Brock was trapped underneath the corner of the dresser, and twin brother Bowdy worked to figure out a way to help him out.

Bowdy tried lifting it from various angles, but the dresser wouldn’t budge. He then tried pushing, which worked — he managed to slide the dresser off Brock!

“We are so grateful for the bond that these twin brothers share,” Shoff wrote. “We know Bowdy was not alone in moving the dresser off of Brock.”

Shoff said that he and his wife were upstairs and didn’t hear the dresser fall or any crying.

He said his wife came back downstairs a few minutes later and saw the dresser on the floor, but the boys were fine, so they didn’t realize what had happened until they saw the video.

Shoff said he decided to share the video — to warn other parents.

It can be prevented by affixing pieces of furniture such as dressers and bookcases to the wall, and remember it’s not only the taller or bulkier items that pose a threat.