Shares
Just days after the NFL’s regular season ended, Cowboys fans have got a reminder that they haven’t been to a Super Bowl in over a decade. 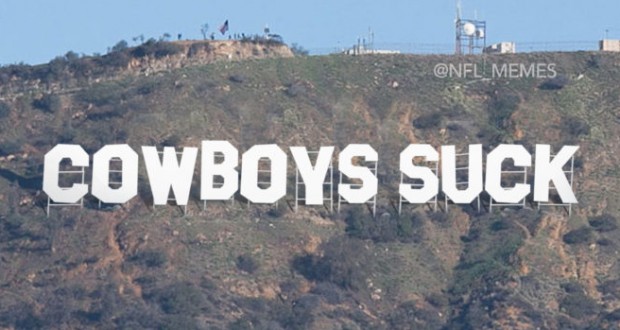 The vandal, who police suspect is a male, a football fan, and likely in good physical shape used custom made lettering almost identical to the one that has stood for decades to replace the letters reading ‘Hollywood.’

The vandal was caught on security-camera footage between midnight and 2 p.m. local time, but police can’t tell his race or height because it was dark and raining, Garcia said. “He left a note reading, “It was either this, “Dez Dropped It” or “The Warriors Blew A 3-1 Lead.”

Estevan Montemayor, a spokesman for Los Angeles City Councilman David Ryu, whose district includes the Hollywood sign, had earlier promised the iconic sign would be restored to its normal state.”

“This is almost as embarassing for the park service in charge of monitoring the sign than it was for Mark Sanchez completing his passed to the defense thinking he was still on the Eagles Sunday,” Montemayor said Sunday morning.

There are sensors at the sign that trigger an alarm for police, but because the sensors are only in certain areas of the letters, it’s possible to avoid them. There’s a road accessible to the public by foot and car behind the sign.

It should be recalled that on January 1, Los Angeles residents woke up in the morning to see the iconic landmark changed to “HOLLYWeeD.”