Home / US / Orca Tilikum, who starred in Blackfish and once killed a trainer, dies after 33 years in captivity

Orca Tilikum, who starred in Blackfish and once killed a trainer, dies after 33 years in captivity

Shares
SeaWorld officials did not give a cause of death when they announced the orca's death on Friday morning. A necropsy will be performed. 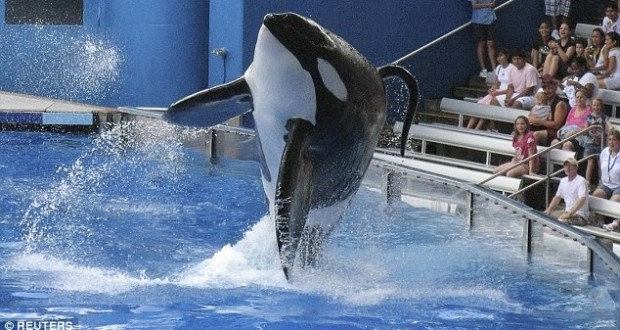 Tilikum was estimated to be 36 years old and was kept in captivity for 33 years, the Daily Mail reports.

Officials said Tilikum had faced serious health issues and was being treated at the time by veterinarians for a persistent and complicated bacterial lung infection.

‘Tilikum had, and will continue to have, a special place in the hearts of the SeaWorld family, as well as the millions of people all over the world that he inspired,’ SeaWorld President and CEO Joel Manby said.

Tilikum spent the majority of his life in captivity after being captured off the waters of Iceland when he was just a calf in 1983.

He was moved to the park known as Sealand of the Pacific in Canada, where nine years later he would be involved in the death of a trainer.

A part-time trainer was killed in 1992 after she slipped and fell into the pool where Tilikum and two female orcas were being kept.

The three whales then submerged the trainer, who drowned.

Tilikum was then moved to SeaWorld Orlando a short time after and Sealand later closed.

In 1999, a naked man who had eluded security and sneaked into SeaWorld at night was found dead the next morning draped over Tilikum in a breeding tank in the back of Shamu Stadium.

But it was the 2010 death of SeaWorld trainer Dawn Brancheau by Tilikum after a Dine with Shamu show that left the biggest impact on the future of orcas at SeaWorld parks.

Brancheau was interacting with Tilikum before a live audience at SeaWorld Orlando when he pulled her from a platform by her hair and held her under the water.

Even Blackfish director Gabriela Cowperthwaite admitted to being scared of Tilikum before she actually began filming.

The film had a massive impact on public perception as it showed Tilikum’s life in a small pool, where he was often bullied by the female killer whales.

It talked of how Tilikum was separated from his mother to become the park’s most prolific male orca, used to breed 14 calves in his 25 years at SeaWorld Orlando.

‘Tilikum is a tragic figure,’ former trainer John Jett, who cared for Tilikum when he arrived in Orlando in 1992, told the magazine.

‘I have often thought about the terror, confusion and stress that Tili has been forced to endure.’

It was Blackfish that turned the public’s sympathy toward Tilikum as it dealt a crushing blow to SeaWorld’s reputation.

After the documentary played at the Sundance Film Festival and aired on CNN, several entertainers pulled out of planned performances at SeaWorld parks and animal rights activists increased their demonstrations outside the parks.

In March, SeaWorld’s CEO acknowledged that the public’s attitude had changed about keeping killer whales captive and that the company would end its orca breeding program.

‘We needed to move where society was moving,’ Manby said.

That same month, SeaWorld Entertainment announced that the parks would end its orca breeding program as well as theatrical shows involving killer whales.

Tilikum’s death unleashed an outpouring of tributes on social media on Friday, with many continuing to cry for boycotts against SeaWorld.

PETA was one of the first to tweet about Tilikum’s death on Friday morning, posting a picture of the whale that read: ‘RIP Tilikum. Dead after three decades of misery.’

Many also brought up that Tilikum’s death comes just days after Granny, the oldest known living orca, was missing and presumed dead at the estimated age of 105.