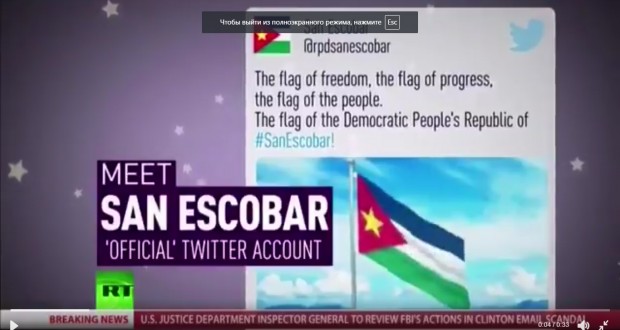 Did MSNBC get hacked? pic.twitter.com/kKgYsyTxUG

The MSNBC glitch occurred just hours after RT overtook C-SPAN’s confirmation feed for a full ten minutes. An MSNBC spokesman told CNN’s Brian Stelter that, “the show was pre-taped but there was a technical glitch that was resolved in a matter of seconds.” C-SPAN released a statement, saying they don’t believe that they were hacked and are operating under the assumption that it was an “internal routing issue.” A signal carrying the state-run Russia Today network cut into C-SPAN’s feed at 2:30 p.m., when Rep. Maxine Waters was voicing support for a strong Securities and Exchange Commission.

Rep. Waters went on to mention Russia several times while the feed was interrupted.

Thursday morning, the CIA confirmation hearing was interrupted when the lights mysteriously went out during the hearing. The blackout occurred about ten minutes into the Senate Committee on Intelligence hearing for Representative Mike Pompeo.

“Chairman Burr and I have committed to conduct a review of the intelligence supporting the Intelligence Community’s assessment that Russia, at the direction –,” Sen. Mark Warner said, when the power to the room, including the camera feed, cut out at 10:14 a.m Eastern time. Sen. Warner went on to say, “…of President Vladimir Putin.”

The series of irregularities comes two days after Buzzfeed released an unverified, unsourced opposition research dossier on Trump, which sparked an ethics backlash against the website, but also kept the focus on Russia and the U.S. Intelligence community.