Home / US / No Hoax: Massive alligator caught on video in Florida

No Hoax: Massive alligator caught on video in Florida 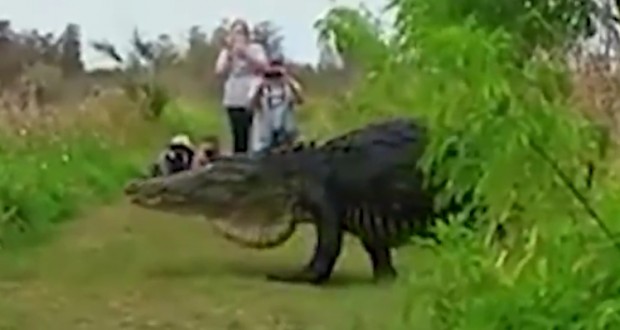 When a video of a giant alligator walking through one of Polk County Discovery Center’ reserves in Florida hit the internet this weekend, some people were a little skeptical. But according to experts, this video is likely real, National Geographic reports.

This truly massive alligator was spotted casually walking across a path in Central Florida. The locals call it “Hunchback.” pic.twitter.com/rBMt6JwtQ4

American alligators (Alligator mississippiensis) actually can get that big.

“The largest published size record for the American alligator is a 14 ft. 9.25 in. individual that was killed in Alabama in 2014,” says wildlife ecologist and conservation biologist David A. Steen. “The American alligator in the video does not look nearly as big as those record-holders and I have no reason to suspect it is a fake.”

“The animal in the video is most certainly an American alligator, and it’s a pretty large one, probably a male,” he says. “I can’t tell if somebody photoshopped the people in the background, but it appears to be authentic.”

Kim Joiner, the woman who filmed and posted the video on Facebook, told News 6that she thought the gator looked about 12 feet long. Recchio notes that images in the background of a photo or video can often trick the eye into making whatever’s in the foreground seem bigger than it is. Nevertheless, he says that “12 feet is not unreasonable to estimate.”

This isn’t the first time a gator of this size has made the rounds on the internet. Last year, Snopes verified a video of a large alligator walking across a golf course in Palmetto, Florida.

If you see a massive gator, it’s probably male. Female alligators are smaller, and usually don’t grow past ten feet. Crocodiles can be even bigger than alligators—the largest crocodile ever recorded was 20.24 ft.

Like crocodiles, alligators can continue growing throughout their whole life, which can last 70 or 80 years. That’s not to say that the biggest are necessarily the oldest—just like humans, there is individual variation among alligators.

Yet there is one very important reason why people have been spotting alligators that seem large enough to be dinosaurs—conservation has helped alligator populations to rebound.

“This was a species that was persecuted, almost to extinction, so the population had been reduced,” Recchio says. “We now are seeing older mature alligators, which in the past weren’t around because they were hunted.”