Shares
While George H.W. Bush remains in the intensive care unit of a Houston hospital after experiencing "shortness of breath," the former president's wife, Barbara, has also been admitted for a separate health issue, according to their spokesman 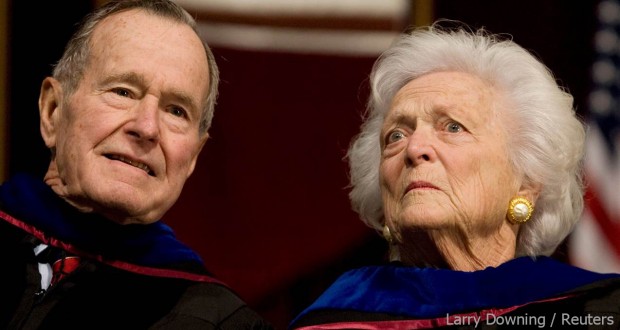 The former first lady was taken to Houston Methodist Hospital on Wednesday morning “as a precaution after experiencing fatigue and coughing,” spokesman Jim McGrath said in a new statement following an update on her husband’s condition, NBC News reports.

Her husband, 92-year-old Bush, was first admitted to Houston Methodist Hospital Saturday for shortness of breath, but on Wednesday underwent a procedure to treat an acute respiratory problem stemming from pneumonia, McGrath said.

“Doctors performed a procedure to protect and clear his airway that required sedation,” McGrath said. “President Bush is stable and resting comfortably in the ICU, where he will remain for observation.”

McGrath said doctors believe the procedure, in which a tube was used to remove a blockage in a lung, was a success. Until Wednesday morning’s issue, Bush was making great progress, McGrath said. “Yesterday, he was telling everybody he’d be out by Thursday or Friday,” he said.

His office announced earlier this month that George H.W. and Barbara would not attend Donald Trump’s inauguration this week due to the former president’s age and health.

“Barbara and I are so sorry we can’t be there for your inauguration on January 20th. My doctor says if I sit outside in January, it likely will put me six feet under. Same for Barbara. So I guess we’re stuck in Texas,” Bush said in a Jan. 10 letter. “But we will be with you and the country in spirit.”

President Barack Obama was among those wishing George and Barbara Bush well. “They are as fine a couple as we know. So we want to send our prayers and our love to them.”

Former President Bill Clinton said his thoughts were with the Bushes after learning about their hospital stays Wednesday. Hillary Clinton also sent her well wishes in a tweet and President-elect Donald Trump said he was “looking forward to a speedy recovery.”

41 and Barbara—thinking about you both and sending wishes for a speedy recovery. Love, 42.

Bush, who served as U.S. president from 1989 to 1993, has a form of Parkinson’s disease and uses a motorized scooter or a wheelchair for mobility. He was hospitalized in Maine in 2015 after falling at his summer home and breaking a bone in his neck.

In December 2014, he was hospitalized in Houston for about a week for shortness of breath. Previous to those stays, he spent Christmas 2012 in intensive care for a bronchitis-related cough and other issues.

Despite the loss of mobility, he celebrated his 90th birthday by making a tandem parachute jump in Kennebunkport. Last summer, Bush led a group of 40 wounded warriors on a fishing trip at the helm of his speedboat, three days after his 92nd birthday celebration.