Home / US / On eve of inauguration, Trump addresses nation in shadow of Lincoln

On eve of inauguration, Trump addresses nation in shadow of Lincoln

Shares
Trump spoke at the Lincoln Memorial, where Martin Luther King Jr declared ‘I have a dream’, and told the largely white crowd: ‘You’re not forgotten any more,’ as The Guardian reports 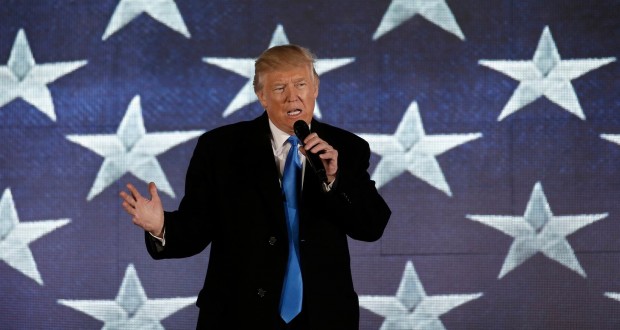 Donald Trump staked his claim to Washington on Thursday by promising to “make America great again” while at the feet of the US capital’s giant marble statue of Abraham Lincoln in a celebration of patriotic music, military pageantry and fireworks, The Guardian reports.

The president-elect delivered a brief speech from the Lincoln Memorial, close to the spot where in 1963 Martin Luther King Jr declared, “I have a dream.” Trump told the largely white crowd: “You’re not forgotten any more.”

On a cold night of heavy and sometimes heavy handed symbolism ahead of Friday’s inauguration, Trump led thousands of supporters in chants of “make America great again”, saying: “And I’ll add, greater than ever before.” A spectacular array of fireworks shot into the sky and spelled: “U-S-A” as the Battle Hymn of the Republic rang out.

Accompanied by his wife, Melania, and other family members, he then walked up the steps and spent the better part of a minute silently contemplating the seated Lincoln, the president who won the civil war and helped end slavery. His celebrated Gettysburg address and second inaugural address are inscribed on the chamber walls.

Supporters lined the pool at the National Mall, many wearing “Make America great again” baseball caps and other regalia, though the area was far from full and some left early as temperatures plummeted after dark. Nearby were the Vietnam war memorial and ghostly figures of soldiers at the Korean war memorial.

But it was the juxtaposition with Trump’s fellow Republican Lincoln, the 16th and arguably greatest US president, that was most striking. Hollywood actor Jon Voight, a vocal Trump supporter, told the crowd: “President Lincoln who sits here with us I’m sure is smiling knowing we will be led by an honest and good man, who will work for all their people no matter their creed or color. We will see a renewed America.”

Some observers, however, found the choice of the Lincoln Memorial jarring. Keith Stiggers, 25, who is African American, said: “When I saw that I was like, wow! Probably a lot of his supporters don’t like Lincoln and his legacy for the country. Is he going to uphold that legacy or is he going to do what he can to step on it?”

Stiggers, a law student, had come with his fiancée to support democracy and feels that Friday’s inaugural address will be crucial. “I think he should definitely build bridges. He got a lot of support from the ‘alt-right’ and now he should make it clear he is governing for all Americans. His speech is going to be very important; it’s going to dictate the pace of his presidency.”

The free “welcome celebration” had begun just after 4pm with military marching, music and pageantry, including the national anthem, followed by a change of gear with drummer DJ Ravidrums (Ravi Jakhotia), who has served as a personal DJ for Hugh Hefner. Behind him giant TV screens flashed the names of every US state.

There were performances from soul singer Sam Moore and an improvised country music group, laden with patriotism. Eventually Trump and his wife, Melania, appeared to the soundtrack of The Rolling Stones’ Heart of Stone. The president-elect turned to give Lincoln a military salute before descending the steps to chants of “Trump! Trump! Trump!”

They joined other family members behind protective glass to watch artists including the Piano Guys – “It’s time to put all our differences aside” – rock band 3 Doors Down, Lee Greenwood and country singer Toby Keith, who was introduced as “one of the most popular artists in history”. Trump is said to have had trouble attracting A-list stars to appear at the event.

Tom Barrack, president of the presidential inauguration committee, then introduced the TV celebrity and businessman turned politician. “I would like you to pay tribute to the courage, to the strength, to the loyalty of this man,” he said.

Trump, holding a microphone in his left hand, thanked his supporters and said: “I’m just the messenger … It’s a movement like we’ve never seen anywhere in the world, they say … it’s something that’s very, very special. The phrase, you all know it, half of you are wearing the hat: make America great again.”

Trump reflected on the noisy rallies of his election effort, which few observers thought would lead to Friday’s ceremonies 18 months ago. “There was never an empty seat, like tonight,” he said. “We all knew that last month of the campaign … we knew that something special was happening.

“The polls started going up, up, up, but they didn’t want to give us credit. Because they forgot about a lot of us. When the campaign started I called it the forgotten man and forgotten woman. Well, you’re not forgotten any more.”

The crowd cheered. Trump promised to bring jobs back, and not let other countries take US jobs any longer, while also rebuilding the military.

“We are going to do things that haven’t been done in our country for many, many decades, I promise you.”

Trump and his wife, Melania, will on Friday morning go to the White House for tea with Obama and his wife, Michelle, even as house movers work upstairs to swap their private possessions.

The inauguration ceremony will begin with performances by the Talladega Marching Tornadoes, the Rockettes dance troupe, the Mormon Tabernacle Choir and 16-year-old singer Jackie Evancho.

At noon, in a scene not so long ago unthinkable to the political establishment, Trump will take the oath of office, administered by Chief Justice John Roberts. He will place his hand on his own Bible – a gift from his mother in 1955 – as well as a Bible used by Abraham Lincoln at his first inauguration.

In an operatic tableau, standing nearby will be Hillary Clinton, the candidate Trump threatened to jail during the campaign. She received 2.9 million more votes than he did last November but lost the electoral college. Former presidents Bill Clinton, George W Bush and Jimmy Carter will also be present.

Trump will become the first US president in the 240-year-old republic who has never served in the military or held public office. At 70 he will also be the oldest in his first term, eclipsing Ronald Reagan’s record.

Barrack Obama said Trump’s inaugural speech would focus on “the issues that unite us” and claimed that the divisions from the campaign would “vanish”. “What you’ll hear in his address is a switch from candidate to president,” he told the CBS This Morning show.

Here is where you can watch livestream Donald Trump’s inauguration.