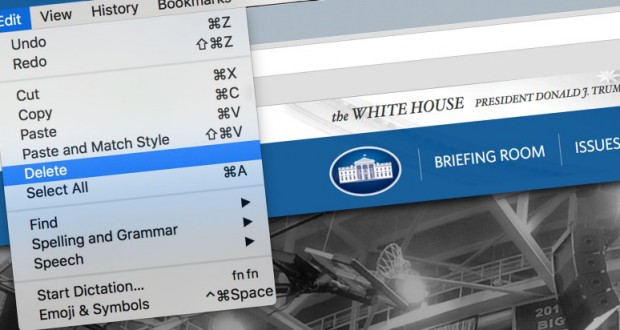 The page on climate change was replaced with a page entitled “An America First Energy Plan” that ignores climate change entirely and says, “President Trump is committed to eliminating harmful and unnecessary policies such as the Climate Action Plan and the Waters of the U.S. rule.”

The new “America First Foreign Policy” page made no mention of Russia or China, instead discussing the defeat of ISIS and the renegotiation of NAFTA and other trade deals. “If our partners refuse a renegotiation that gives American workers a fair deal, then the President will give notice of the United States’ intent to withdraw from NAFTA,” the page read. The same language was repeated on the new “Trade Deals Working for All Americans” page on Whitehouse.gov.

The page on civil rights was replaced with a page entitled “Standing Up For Our Law Enforcement Community” that replaces concerns with how police act with a demand for more cops. It also paints predominantly black inner cities as shooting galleries.

Trump’s campaign website was more robust, featuring pages on a variety of issues and including press releases related to the black community, like “DONALD J. TRUMP’S NEW DEAL FOR BLACK AMERICA.” Now the words “black” or “African-American” do not appear once in any policy sheets on WhiteHouse.gov.

In contrast, President Obama’s WhiteHouse.gov page on his first day in office featured a slate of issues he campaigned on; Trump’s White House page doesn’t even have a policy page on his signature campaign issue: immigration.

Maybe that will be included in the updates from Trump visitors can sign up for. WhiteHouse.gov isn’t the only part of the executive branch unfilled: hundreds of appointments have still not been named and the Trump transition team announced Thursday it would keep 50 essential State Department and national security personnel.