Donald Trump’s Horrifying Signature Is a Cry for Help 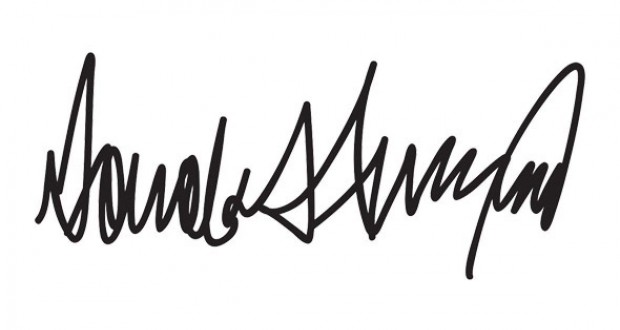 As Slate writes, this is quite an autograph! It is less a sequence of letters than the impressionistic output of some rudimentary machine. Or perhaps Trump is facilitating Kellyanne Conway’s injunction that we look at what lies within his heart by sharing his EKG results. (Or maybe, as Jean Grae on Twitter suggests, these lines are “the sound wave of demons screaming.”) There are a lot of spikes. There are no spaces or curves. Most of the characters are indistinguishable from one another.

Who is the man who made these strokes? Rather than a literate person, this signature conjures someone who would very much like to write in script one day. For now, he has learned to assiduously move his pen up and down while counting to three in his head. Handwriting analysts have already made great hay from the presidential script. Politico interviewed an expert who detected in Trump’s writing not grandstanding ignorance but evidence of “bigheadedness, anger, and fear.” “The writer lacks empathy and craves power, prestige, and admiration,” the expert said, before observing that Trump’s oversize P—as in, uh, president—might be compensating for something. My colleague Christina Cauterucci suggests that the signature could be an homage to the Neiman Marcus logo. Scrawled below this terrifyingly gloomy and menacing inauguration photo, it looks more like the skyline of an urban dystopia.

After staring at this accursed cursive for hours, I’ve come to the conclusion that this signature is a cry for help. Donald J. Trump is trying to tell us that he’s not really Donald J. Trump. His real name is AuuuUUuuuuuA.