Shares
President George H.W. Bush will be moved out of the intensive care unit at Houston Methodist Hospital and Mrs. Barbara Bush was released Monday, according to their doctors. 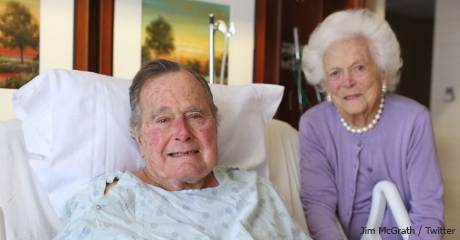 The doctors said that the former president will be moved to a regular floor and that he could be discharged by Friday although more likely not until next week, according to WFAA.

Spokesman Jim McGrath tweeted a touching photo of the Bushes in the hospital and said they “thank their fellow Americans and friends from around the world for their prayers and good wishes.”

President and Mrs @GeorgeHWBush thank their fellow Americans and friends from around the world for their prayers and good wishes. pic.twitter.com/PhpXXGKl6p

The spokesman said the former president is getting better by the minute and has come a long way since his breathing tube was removed this past Friday.

He’s been at Houston Methodist since Jan. 14 and is being treated for pneumonia.

Mynderse said the former president has been sitting up and watching TV and is “waiting anxiously for his favorite oyster stew for lunch.” He was also joking and talking with nurses.

President Bush still has a fair amount of coughing they said, but that they were addressing it with various breathing treatments.

Meanwhile, Barbara Bush was admitted on Jan. 18 for bronchitis.

Although she too has been receiving treatment, doctors say she’s been by his side as much as possible.

“They are essentially therapy for each other. They help in our compliance in terms of when one of them doesn’t want to take a breathing treatment the other says get on that. It helps our cause!” Dr. Clint Doerr said.

According to the family spokesman, the former first lady was given the all clear to go home on Sunday but chose to stay another night to be close to her husband.