Shares
CBS News confirmed reports that President Donald Trump brought a studio audience to his visit with the CIA on Saturday. 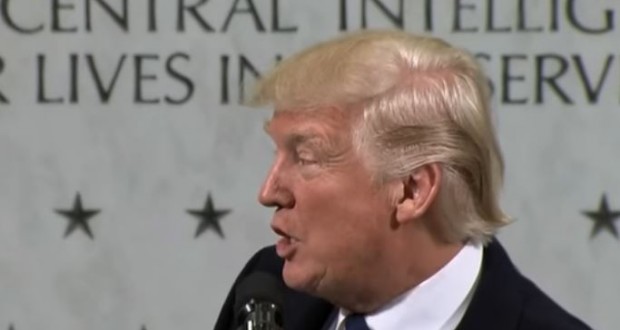 The news agency reports that an official said the visit left a wake of “unease,” “made relations with the intelligence community worse,” and was “uncomfortable,” Politicus USA reports.

CBS News confirmed reports that President Donald Trump brought a studio audience to his visit with the CIA on Saturday. The news agency reports that an official said the visit left a wake of “unease,” “made relations with the intelligence community worse,” and was “uncomfortable.”

Intelligence people were “stunned” and “offended by the president’s tone,” CBS reported U.S. government sources tell CBS News that there is a sense of unease in the intelligence community after President Trump’s visit to CIA headquarters on Saturday.”

Also, Trump did bring cheering props, which fits with how he has operated previously in requiring a cheering section – a sort of laugh track of supportive extras like those his campaign hired for his announcement event. It has been confirmed by Trump insiders that the President loves props.

“Authorities are also pushing back against the perception that the CIA workforce was cheering for the president. They say the first three rows in front of the president were largely made up of supporters of Mr. Trump’s campaign,” CBS continued.

The crowd was filled out with about 40 Trump invites and also, the front rows were senior CIA who were not cheering (on the video you can see their heads pivot to the cheers and laughter while not joining in), “An official with knowledge of the make-up of the crowd says that there were about 40 people who’d been invited by the Trump, Mike Pence and Rep. Mike Pompeo teams. The Trump team expected Rep. Pompeo, R-Kansas, to be sworn in during the event as the next CIA director, but the vote to confirm him was delayed on Friday by Senate Democrats. Also sitting in the first several rows in front of the president was the CIA’s senior leadership, which was not cheering the remarks.”

They told CBS that Trump certainly does have supporters in the CIA workforce, and they were standing off to the right, which I observe was the direction Trump directed his most needy remarks.

While Trump supporters have used his Saturday visit to the CIA as proof that everyone who matters loves the new President, in reality his visit did more damage than good.

Trump needed to repair relations with the CIA after spending his time on the trail undermining the intelligence community, but instead he offended them in numerous ways to the degree that they are now confirming to the press that he brought his own cheering audience.

The real point here isn’t just that Donald Trump is very insecure, but more importantly that he tried to mislead the public into seeing the CIA as a partisan agency that wholly supported his very divisive campaign and now presidency. By doing that, Trump is working toward his larger goal of undermining the American voters’ trust in our government and media.