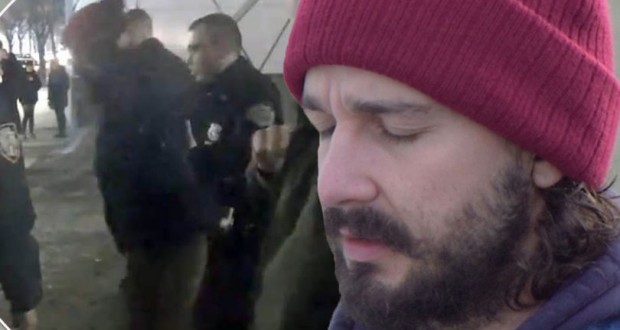 The 30 year old actor was taken into custody by police following a row at his He Will Not Divide Us art installation.

A video taken from the art installation at the Museum of the Moving Image shows the 30 year old actor being arrested in the background of the footage. While it’s not clear exactly why Shia was arrested, an earlier video from the event showed a man approaching the actor and embracing him before shouting: “Hitler did nothing wrong”.

The actor then seemed to shove the unnamed man away before the camera panned away from the scene.

“Shia took a hit for us,” a protester said. “He came out and tried to protect us.”

The protest is now continuing in the absence of the actor.

Police have been stationed at the protest site since Monday.

The He Will Not Divide Us art installation was created by Shia along with artists Nastja Säde Rönkkö and Luke Turner.

It involves a camera mounted on a wall outside the Museum of the Moving Image in Queens, New York.

They aim to run the installation – that encourages passers by to chant the phrase – for the next four years or the length of Trump’s presidency.

The Ray Donovan star has been a vocal supporter of the controversial new president and singled out Shia and singer Miley Cyrus – who attended the Women’s March in Los Angeles over the weekend – for not setting a good example.

“When you see the young people like Shia LaBeouf and Miley Cyrus, they have a lot of followers, young people are looking at them and what are they teaching?” he said.

“They’re teaching treason, they’re teaching going up against the government, not accepting the will of the people on this Presidency and it’s a very sad day when I see this.”