Shares
Explosive new footage has emerged claiming Nasa’s attempts to reach the moon – including the famous landings – were a hoax. 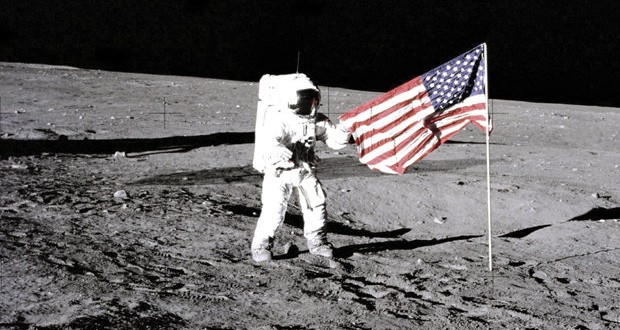 Neil Armstrong, Buzz Aldrin and Michael Collins flew were part of the Apollo 11 crew in 1969 – the first successful manned flight to reach Earth’s only natural satellite. The mission made history, but ever since it has been at the center of a conspiracy theory, claiming that it was set up and filmed by America to win the fierce space race ahead of the Russians.

A new video on YouTube suggests the Apollo 10 – the fourth manned mission to the moon – was also faked, according to Daily Star Online.

The uploader says a reflection in the glass of the capsule features one of the astronauts, who should be displaying weightlessness.

But they claim the figure – with the American flag badge on the suit still visible – alternates between seating and an upright position. The uploader writes: “On the right side of the screen, you can see the astronaut’s reflection in the glass.

“His shoulder is still visible as he turns again, and shockingly he turns and walks away. He even seems to be striding away and we can see him adjusting his pants as he does.

“What’s shocking about it is that there is absolutely no weightlessness.

“As we watch the astronaut walk away, back turned to us, giving his pants a tug, we think of all the countries with space programs – Russia, Europe, Japan and China – we wonder what kind of grand hoax is being played on humanity, and to what end?” Daily Star Online shared the film with infamous moon landings denier and filmmaker Bart Sibrel, director of A Funny Thing Happened on the Way to the Moon.

He said he “suspects” the analysis of the footage is “correct”, and even claims he confronted Apollo 10 astronaut John Young about claims his journey was a hoax.

Daily Star Online previously interviewed Mr Sibrel in 2015 over his claims the moon landings were devised by the CIA.

He believes the historic event in 1969 took place on a film set and the crew were actors given instructions by the intelligence agency through ear pieces.

The filmmaker has been on a mission since he was 24 to prove the landings were a major cover-up.

And a month later, further evidence emerged to give his claims credence.

A secret filming was released in late 2015 appearing to show the late film director Stanley Kubrick admit he pulled the strings behind the scenes of the historic moment nearly five decades ago.

Mr Sibrel said: “As stated in A Funny Thing Happened on the Way to the Moon, the Apollo astronauts were on the rocket launches to add as much realism as possible, not only to later splashdown in the ocean in front of witnesses, yet to also achieve convincing zero gravity footage inside the actual spacecraft for television audiences, they just never left Earth orbit, as they are still unable to leave Earth orbit today, 50 years later.

“Thusly, anything beyond Earth orbit, even ‘half way to the moon’ as demonstrated in ‘A Funny Thing’, was falsified.

“The Apollo 10 footage is actually very difficult to interpret, though I suspect the editorial is correct.

“Additionally, in the complete unedited version of my newly discovered unedited outtakes of Apollo 11 mission’s photographic forgery, they comment ‘This is the way ‘Ten’ did it’, meaning that Apollo 10 also faked anything beyond earth orbit, just as Apollo 11 was similarly doing at the time of this statement.”

“I confronted Apollo 10 astronaut John Young with his lunar orbit forgery, merely asking him to swear on the Bible that he orbited the moon, which he did not.”

And some researchers even believe the moon may have been man made.