Shares
A social media campaign to “free Melania Trump” continued to grow in momentum last night after the First Lady was spotted with US President Donald at a Super Bowl party. 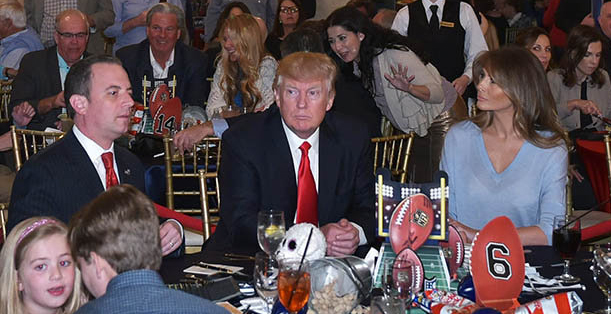 The 46-year-old former model accompanied President Trump as he roared on the New England Patriots from his Mar-a-Lago golf club in Florida, Joinfo.com reports with reference to Daily Star.

But she looked less than enthralled with both her company and the game as she sat looking sullen and disinterested, reigniting the #FreeMelania hashtag that went viral during Trump’s inauguration.

Footage from inside the luxury resort shows President Trump conversing with White House Chief of Staff Reince Priebus, ignoring his wife while she appears lost in her thoughts next to him.

See also: People Are Worried About Melania Trump After Seeing These “Sad” Pictures.

Eventually, he turns and murmurs to her before turning away once again.

“Melania’s face though! Probably the First Lady to never actually WANT to move into the White House,” wrote one viewer.

Another comment read: “Melania is the face of America these days.”

The 70-year-old reportedly left the party before the start of the game’s fourth quarter – missing the Patriots’ historic comeback. He is said to have listened to the rest of the game on the radio from his Presidential motorcade.

The Patriots trailed by 25 points in the third quarter but recovered to level at 28-28 and overtime for the first time in Super Bowl history.

Just hours earlier, President Trump was seen dropping his wife’s hand after getting off the plane in Palm Beach, Florida, in yet another awkward snub for Melania.

Trump ‘won’t hold hands with Melania in public because he wants to look like a presidential alpha’ https://t.co/BxiFYhh3mg