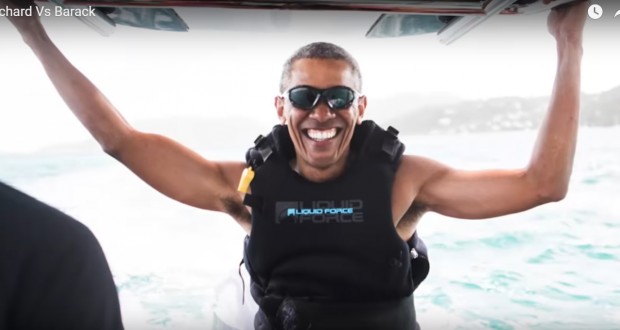 Obama tried his hand at kitesurfing, while Branson, the founder of the Virgin business empire and an extreme sports enthusiast, was on a foilboard.

“Barack and I both fell many times, but we kept trying again and again and made progress over the days,” Branson wrote in a blog post. “We were neck and neck until the last run on the last day, when I got up on the foilboard and screamed along for over 50 metres, three feet above the water. I was feeling very pleased with myself, only to look over and see Barack go 100 metres on his kiteboard! I had to doff my cap to him and celebrate his victory.”

It’s one of the first glimpses of Obama’s life after the presidency. In the last days of his second term, Obama talked about needing to take his family on vacation before he could focus on his next job.

“Michelle and I are off on a quick vacation, then we’ll get back to work,” he tweeted shortly after President Donald Trump’s inauguration.

Obama has left the island of Necker, where the “friendly challenge” took place, according to Branson, who added that he’s looking to beat Obama next time but isn’t bitter about losing the first round.

“After all he has done for the world, I couldn’t begrudge him his well-deserved win,” Branson wrote.