Shares
President Donald J. Trump hit back at Nordstrom this morning on Twitter after the retailer said it wasn't buying his daughter Ivanka's clothing line for this season. 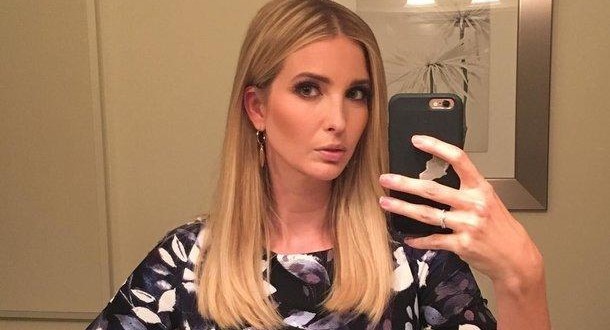 “My daughter Ivanka has been treated so unfairly by @Nordstrom,” wrote Trump. “She is a great person — always pushing me to do the right thing! Terrible!”

“This is a direct attack on his policies and her name,” Trump’s press secretary Sean Spicer later said of Nordstrom’s move during an afternoon press conference, Joinfo.com reports with reference to NBC News.

The tweet was sent at 10:51 a.m., twenty-one minutes after the president’s daily intelligence briefing was scheduled to start. 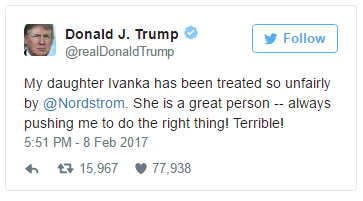 Spicer said the president was “free at the time” when he tweeted.

The blowup comes six days after Nordstrom announced it would not order Ivanka’s collection this season. The luxury department store chain denied that the move was in response to a #GrabYourWallet campaign orchestrated to get the store to stop carrying Ivanka Trump’s brand in protest of her father’s policies.

Nordstrom didn’t respond to a request for comment. In a statement last week Nordstrom it said it routinely trims brands each year and “in this case, based on the brand’s performance we’ve decided not to buy it for this season.”

A spokesperson for Ivanka Trump told NBC News that the brand had been selling well and the move was in response to pressure from advocacy groups — a claim Nordstrom denied.

“This was absolutely not political — it was exclusively based on the performance of the brand,” a Nordstrom spokesperson told apparel site Refinery29. “Simply put, the performance has been difficult over the past year.”

The retailer also denied that the move was related to an internal memo offering support and resources to employees affected by Trump’s travel ban sent the day before.

The Ivanka Trump spokesperson that though the shoe order had been canceled and the line was pulled from the website, some of the spring collection would still be sold in stores. In a tweet Nordstrom said customers will still see Ivanka Trump product in stores until it sells out.

Other retailers have recently stepped back from carrying Ivanka Trump products. Neiman Marcus has stopped selling her jewelry on its website. TJ Maxx on Wednesday instructed employees to toss Ivanka Trump signage into the garbage and mix her clothes in with their regular sales racks, the New York Times reported.

“It’s an example of why Donald Trump and his family needed to step away, needed to make a more definitive break, and I think it’s an abuse of the office of the presidency,” Norman Eisen, former special counsel on ethics to the Obama Administration told MSNBC.

“He’s putting the bully in the bully pulpit to attack this company on dubious factual assertions in order to promote his daughter.”

Nordstrom’s stock briefly ticked down after the President’s tweet, then recovered.