US Northeast Hit By the Biggest Snowstorm of the Winter 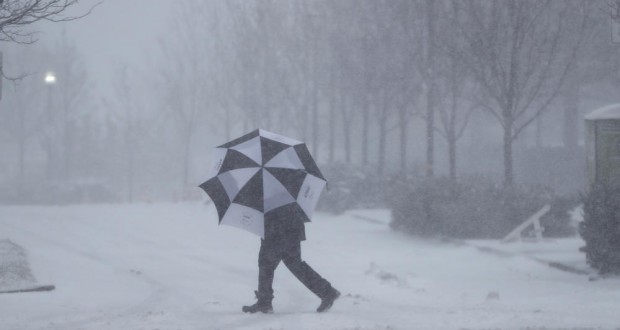 The biggest storm to hit the Northeast this winter dropped a foot or more of snow along the New York-to-Boston corridor Thursday, turning roads treacherous, grounding flights and giving millions of people weather whiplash a day after temperatures soared into the 50s and 60s (up to 20C), Joinfo.com reports with reference to Chicago Tribune.

Scores of accidents were reported as drivers confronted blowing snow and slick highways. Stretches of Interstate 95 in Rhode Island were closed in the afternoon after tractor-trailers got stuck.

More than 3,500 flights were canceled across the region and planes bound for New York’s Kennedy Airport were ordered held on the ground for hours while crews cleared the runways. A de-icing truck caught fire at Bradley Airport outside Hartford, Connecticut.

In New York City, a doorman died after falling down a set of stairs and crashing through a plate-glass window while shoveling snow. Police said Miguel Angel Gonzalez, 59, of Bridgeport, Connecticut, suffered cuts on his neck and face.

In Rhode Island, they got “thundersnow,” with whiteout conditions accompanied by the rumble of thunder.

“It’s pretty nuts here,” Felecia White said as she and friends hunkered down in a restaurant in Newport, Rhode Island, waiting for the weather to improve. “Even with four-wheel drive, you can’t do anything. You can’t see across the street.”

As of late afternoon, New York’s Hudson Valley and parts of Long Island had up to a foot of snow, while New York City recorded about 9 inches.

A blizzard warning was posted for a swath of the New England coast, with forecasters saying Boston and Providence, Rhode Island, could get up to a foot and a half by evening. Boston canceled school on Friday, too.

West Hartford, Connecticut, had more than 14 inches by late afternoon, and Ludlow, Massachusetts, had 18 inches. Farther north, Nashua, New Hampshire, received over 13 inches and Berwick, Maine, recorded about a foot.

In Portsmouth, New Hampshire, about 100 people turned out for a snowball fight. Organizer Andrew Bagley said that while there was snow aplenty, it wasn’t ideal for snowball making.

“It’s just an unsanctioned, family-ish event for people staying home on a snow day,” he said. “It’s an excuse to come downtown and act like little kids again.”

In New York City, a group of women in pajamas waited on the sidewalk in the freezing cold to attend a taping of ABC’s “The Chew” show, where the day had been proclaimed “Pajama Day.”

The storm came midway through a largely snow-free winter in the Northeast and a day after much of the region enjoyed a brief taste of spring, with record-breaking highs in some places. Temperatures then crashed more than 30 degrees as the storm rolled in.

“We were waiting for a good one all year,” said Morgan Crum, a manager at Katz Ace Hardware in Glastonbury, Connecticut, where more than 50 people stopped in to buy shovels, ice melt, gas cans and other storm provisions. “We live in New England. This is what we expect.”

The Philadelphia area was largely spared after being told to expect up to 8 inches in the morning. Some suburbs received 5 inches, but by the afternoon, there was almost no trace of snow downtown, and the sun came out.

Wearing a T-shirt, Alicia Jones tossed salt on the sidewalk outside the Philadelphia restaurant where she works and lamented about what could have been. Her daughter had the day off from school, and Jones had been looking forward to playing in the snow with her.