Shares
The White House on Thursday said a top adviser to President Donald Trump had been “counselled” after using a television appearance from the West Wing to promote the clothing and jewelry line sold under the brand of Trump’s daughter. 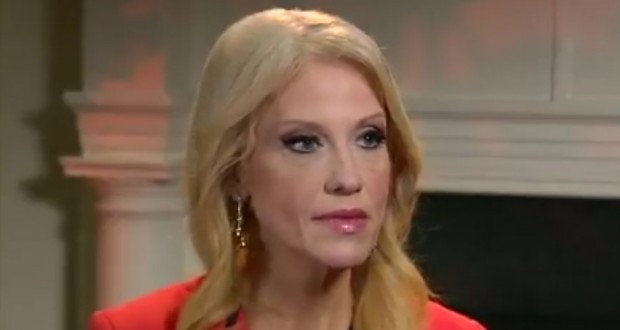 The endorsement, in which Kellyanne Conway told Fox News Channel viewers to “go buy Ivanka’s stuff,” appeared to violate a key ethics rule barring federal employees from using their public office to endorse products. The White House reaction was a rare acknowledgment of an ethical misstep, according to National Post.

Chaffetz, who has resisted calls by Democrats to investigate potential conflicts related to President Trump’s businesses, joined with the Oversight Committee’s ranking Democrat, Rep. Elijah Cummings (Md.), in sending a letter to the Office of Government Ethics calling Conway’s comments “unacceptable.” The letter asked the agency to recommend discipline given that Trump, who as Conway’s agency head would ordinarily take action, holds an “inherent conflict of interest” due to the involvement of his daughter’s business.

In a terse comment to reporters Thursday, White House press secretary Sean Spicer said Conway had been “counselled on the subject” but did not say whether she would be disciplined. Spicer did not say why Conway’s statements had required the intervention, and the White House declined to answer further questions.

“All I can to America’s women is, at some point in your life, you ought to have a boss who treated me like the president of the United States treated me today,” she said.

The incident was the latest illustration of how the Trump White House has struggled to grapple with long-established ethics rules as the president has attempted to balance the potentially competing interests of his new public position and his family’s vast business holdings.

The matter has grown politically thorny in recent weeks as many opponents of Trump’s policies have waged a campaign to boycott the family’s brands and protest at its properties. The tensions underscore the difficulty Trump faces in carrying through on his vow to separate his presidency from his businesses – particularly given that he and his daughter have refused to divest their ownership stakes.

The president has faced criticism from ethics experts and Democratic lawmakers who have warned that his public power could be misused to enrich him and his family. Trump has turned the management of his businesses over to his two adult sons and a longtime executive.

While Trump has said that most ethics laws and rules do not apply to the president, Conway’s stumble Thursday served as a reminder that staffers are nonetheless subject to those provisions.

The Conway episode followed other instances in which Trump’s political rise and his presidency have provided a promotional platform for the family businesses.

On Monday, first lady Melania Trump filed a lawsuit accusing a British news company of publishing an inaccurate story that hurt her ability to take advantage of a “once in a lifetime opportunity” to build her brand of jewelry and accessories. The lawsuit said that the August 2016 article, which falsely suggested Melania Trump had once worked for an escort service, damaged her ability to build “multimillion dollar business relationships for a multi-year term” and damaged her brand during a time when Trump “is one of the most photographed women in the world.”

A day later, after ethics experts criticized the notion of Melania Trump attempting to make money from her public role, her lawyer and a spokeswoman issued statements saying the first lady “has no intention” of using her position for profit.

The first family has struggled to cleanse its public appearances of private entanglements.

In his official White House online biography, Donald Trump boasts of the success of the business he still owns and cites his book “The Art of the Deal,” which remains for sale.

Melania Trump’s initial online biography referenced her jewelry line, once sold on the cable television channel QVC, and noted its trademark, a registration now overseen by a federal office led by her husband.

Ivanka Trump, whose brand includes dresses, shoes, skirts, handbags, jewelry and accessories, much of which is sold online and at dozens of the United States’ largest retailers and department-store chains, mixed her business and newly elevated political profile shortly after the election.

Hours after she was interviewed by “60 Minutes” about her father’s victory, her jewelry line alerted journalists to the fact that she was wearing an Ivanka-brand diamond bracelet, which viewers could buy for $10,800.

Conway’s endorsement of Ivanka Trump’s brand followed a tweet Wednesday by President Trump complaining that his daughter had “been treated so unfairly” by the department store Nordstrom, which dropped her clothing line, citing slow sales.

Responding to national boycotts of Ivanka Trump merchandise, Conway said, “Go buy Ivanka’s stuff is what I would tell you.”

“I’m going to give a free commercial here,” she added. “Go buy it today, everybody. You can find it online.”

Peter Schweizer, who has worked closely with Trump chief strategist Stephen Bannon and wrote a book, “Clinton Cash,” that was critical of donations to the Clinton Foundation, said, “They’ve crossed a very, very important, bright line, and it’s not good.”

“To encourage Americans to buy goods from companies owned by the first family is totally out of bounds and needs to stop,” Schweizer added. “Clearly, the Trumps feel some of this is related to politics. But whether that’s true or not, these marketing battles need to be fought by Ivanka and her company. They cannot and should not be fought by government employees and the White House.”

Schweizer said it was time for Trump “to move beyond the mind-set and the role of a businessman and assume the mantle of commander in chief.”

Federal law states that the director of the Office of Government Ethics can advise the White House and Conway of the violation and recommend disciplinary action. But the OGE’s recommendations are non-binding, and the ultimate decision resides with the White House.

OGE officials did not respond to requests for comment. By midmorning, the agency’s website had crashed, and the OGE’s official Twitter account said that the office’s phone and email systems were receiving “an extraordinary volume” of citizen input about “recent events.”

The office tweeted that its role is to help prevent ethics violations but not to investigate allegations that rules have been broken – a job reserved for the FBI, inspectors general and other watchdogs. Still, the OGE notifies agencies of possible ethics violations and asks for reports on any action taken, a process the office indicated it is “actively following,” according to the OGE’s tweets.

Experts said a typical executive-branch employee who violated the endorsement rule could face significant disciplinary action, including a multi-day suspension and loss of pay. U.S. Fish and Wildlife Service employees, for instance, face a five-day suspension or termination for using public office for private gain.

But enforcement measures are largely left to the head of the federal agency – in Conway’s case, the White House. Conway’s counselling, independent lawyers said, could have included a meeting with members of the White House counsel’s office, but it remained unclear what disciplinary steps would be taken.