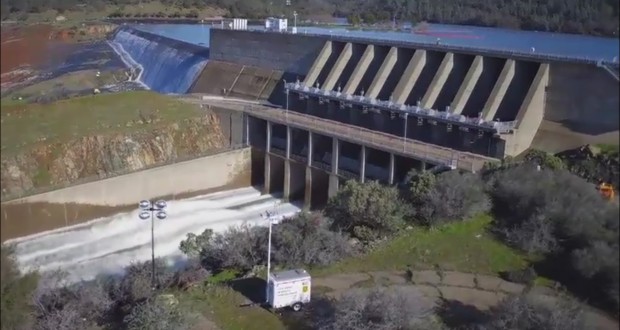 Roads leading out of Oroville, Calif., were jammed with traffic Sunday evening as more than 130,000 people were ordered to evacuate the area due to the possibility of failure of the alternate spillway at Oroville Dam, authorities said, USA Today reports.

Butte County Sheriff Kory Honea said during a news conference Sunday night that he had no choice but to order the evacuation.

“I didn’t have the luxury of waiting to see if all was OK. We need to get people moving quickly and to save lives in case the worst case came to fruition,” Honea said.

“This is a very dynamic situation. This is a situation that could change very, very rapidly,” he said.

“We recognize that this has caused a significant problem with traffic, in terms of exiting the area.”

State route 70 northbound, which runs past Oroville, was gridlocked as of 7:20 p.m. PT. Highway 99, an alternate north-south route eight 10 miles to the east, and state route 162 heading east, away from the Feather River, were jammed as were nearby surface streets, according to satellite feeds from Google Maps.

Highway 49 in Nevada County was turned into one-way traffic, according to Caltrans.

Below is the live blog to see the live stream from the California Emergency Operations Center:

Oroville Police said its department arranged a medical evacuation for a man in a wheelchair in a house on Robinson Street, a few blocks from the Feather River, which runs below the endangered spillway.

Oroville residents were ordered to evacuate Sunday afternoon. The evacuation order was extended to include Marysville and Yuba County around 5:45 p.m. PT, according to Caltrans.

In a post on its Facebook page, the Butte County, Calif., Sheriff’s Department ordered an “immediate evacuation from the low levels of Oroville and areas downstream.”

Police said a “hazardous situation is developing” with the Oroville Dam auxiliary spillway, in which severe erosion could lead it to fail, resulting in an “uncontrolled release of flood waters from Lake Oroville.”

Here is the emergency overflow of #LakeOroville at 830am. pic.twitter.com/8M0GWzcAIk

Flow through the broken main spillway was increased to 100,000 cubic feet per second in an effort to lower the water level in the lake more rapidly.

Residents of Oroville, located about 65 miles north of Sacramento, were ordered to evacuate northward, toward Chico, Calif. As of 6 p.m., Oroville police radio said there were “still a few stragglers” downtown but most people were gone. They also called for expanding the evacuation area to include area around the high school.

Honea wasn’t sure when residents would be able to return home. “We have to assess the safety of the spillway before we let the public back in,” Honea said.

Lake Oroville is one of California’s largest man-made lakes, and the 770-foot-tall Oroville Dam is the nation’s tallest. The lake is a central piece of California’s government-run water delivery network, supplying water for agriculture in the Central Valley and residents and businesses in Southern California.

The dam was built in 1968. Following heavy rains this winter, water on Saturday overtopped the emergency spillway for the first time since its completion, The Sacramento Bee reported Saturday.