Home / US / Andrew Puzder withdraws as US labor secretary nominee 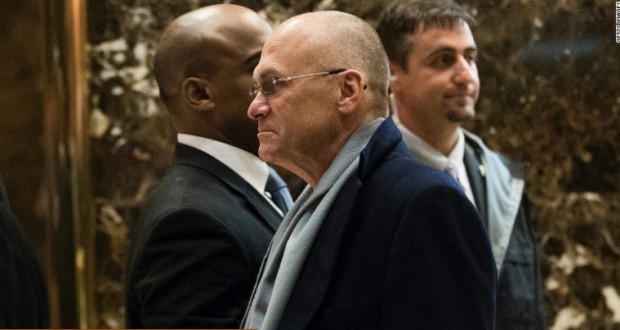 Puzder, the CEO of the company that owns the Hardee’s and Carl’s Jr. fast food chains, faced fierce opposition mostly from Democrats in part related to his position on labor issues as well as the fact that he employed an undocumented immigrant housekeeper, CNN reports.

“After careful consideration and discussions with my family, I am withdrawing my nomination for Secretary of Labor,” Puzder said in a statement Wednesday afternoon. “I am honored to have been considered by President Donald Trump to lead the Department of Labor and put America’s workers and businesses back on a path to sustainable prosperity.

“I also thank my family and my many supporters — employees, businesses, friends and people who have voiced their praise and hopeful optimism for the policies and new thinking I would have brought to America as Secretary of Labor. While I won’t be serving in the administration, I fully support the President and his highly qualified team.”

The decision came as Senate Republicans told the White House he was losing support, a senior GOP source said, adding there were four firm Republican no votes and possibly up to 12.

His team subsequently began to pull back from all their plans regarding the confirmation process. Puzder was scheduled to do extensive preparation on Wednesday afternoon for his confirmation hearing before the Senate on Thursday, but canceled the so-called “murder board” after top Republicans spoke to the White House, a source close to Puzder told CNN.

Around the same time, sources on Capitol Hill were told Puzder was expected to cancel his confirmation hearing. And Puzder’s team told the White House that he did not want to go forward with the nomination if there was no clear path forward.

Senate Democratic Leader Chuck Schumer fanned the flames behind the opposition to Puzder in a statement Wednesday afternoon.

“No matter how you cut it, there is no worse pick for labor secretary than Andrew Puzder, and I’m encouraged my Republican colleagues are starting to agree,” the New York Democrat said. “He does not belong anywhere near the Labor Department, let alone at the head of it. Puzder’s disdain for the American worker, the very people he would be responsible for protecting, is second to none.”

It should be recalled that US National Security Adviser Michael Flynn resigned Monday, after reports he misled senior Trump White House officials about his conversations with Russia.