Shares
Obama scored particularly high on the "equal justice" scale, coming in third behind only Abraham Lincoln and Lyndon Johnson. He also cracked the top ten on the issues of "moral authority" and "economic management." 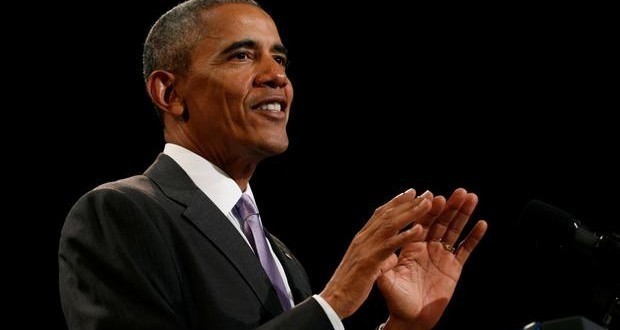 The panel placed the 44th president just below Woodrow Wilson and just above James Monroe, according to NBC News.

It’s the third such survey by the organization, which began polling the panel of presidential experts in 2000. The poll ranks each U.S. president on a battery of issues, including “crisis leadership,” “moral authority,” “international relations” and “pursuing equal justice for all.”

Obama scored particularly high on the “equal justice” scale, coming in third behind only Abraham Lincoln and Lyndon Johnson. He also cracked the top ten on the issues of “moral authority” and “economic management.”

But Obama ranked fifth from the bottom on “relations with Congress,” and got a middling 24th best score on “international relations.”

Historian Douglas Brinkley of Rice University says that Obama’s presidency, despite its weak points, may age well and notch an even higher ranking as time passes.

“There tends to be kind of an upward mobility, particularly if you are a president who had no major scandals,” he said, noting that presidents are also often judged in comparison to their immediate predecessors and successors. “If the Trump presidency is problematic, people may judge Obama even higher yet.”

For the third time in a row, Abraham Lincoln ranked as the nation’s best presidential leader, according to the panel. George Washington came in second, and Franklin D. Roosevelt rounded out the podium at third.

Eisenhower has climbed to fifth place after being pegged at ninth place in 2000. His rise, historians say, may be a result of greater appreciation for his understated style, his measured approach to managing Cold War tensions and ending the Korean War, and particularly his famous — and, many say, prescient — warnings about the growth of the military-industrial complex.

Andrew Jackson, whose populist movement has been compared by some historians to Donald Trump’s unconventional political rise, dropped several pegs in the latest survey, falling from the 13th slot in 2000 and 2009 to just 18th today.

C-SPAN president Rob Kennedy noted that Jackson’s demotion comes after a high-profile debate about whether Jackson should remain on the $20 bill, but also after a new wave of scholarship about the less savory aspects of his presidency, particularly the Indian Removal Act that paved the way for the deadly “Trail of Tears.”

“There’s been a lot written about Jackson over the past eight years, and his drop is probably due quite a bit to things that have happened over time as opposed to this particular moment in history” when it comes to any parallels between Jackson and Trump, he said.

Curious about the worst leader in U.S. presidential history? The ignominious honor goes to James Buchanan, whose failure to address the onset of the Civil War is noted as one of the great failures of leadership in American history.

Buchanan joins four other presidents — Andrew Johnson, Franklin Pierce, Warren G. Harding and John Tyler — at the bottom of the presidential barrel, below even William Henry Harrison, who died after a month in office.

“You never want to be lower than William Henry Harrison,” Brinkley said. “If you’re below Harrison, the thought is that that you really damaged the executive branch during your tenure in office.”