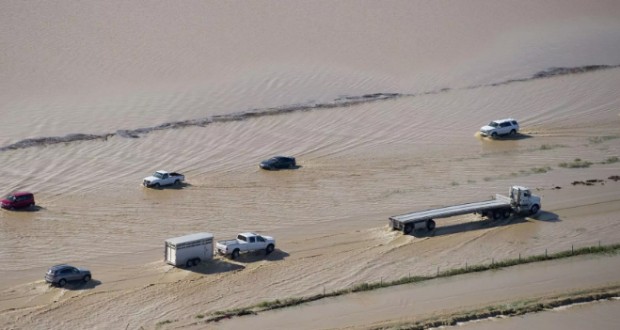 Hundreds were rescued from their flooded homes in San Jose by crews steering boats full of people, some with babies and pets, in chest-deep water. The city had declared a local emergency Tuesday afternoon, USA Today reports.

Rescuers transported at least 225 people to dry land and washed down with soap and water to remove residue from water that traveled over sewer lines, and through garbage and engine fuel, San Jose Fire Capt. Mitch Matlow told Fox News. Only residents who could prove they had been cleaned of the flood waters were allowed to be taken to shelters, the news organization reported.

The series of storms, which dumped up to 10 inches of rain on Southern California late last week, roared through Northern California on Monday and Tuesday. The region’s waterways, already saturated by weeks of heavy rains, were ill-equipped for the latest onslaught.

San Francisco was slammed with almost 2 inches of rain; some areas in the mountains got more than 6 inches. One wind gust reached 199 mph. Although the storms eased Tuesday, the emergency was far from over.

“The rain will stop, but the effects of the rain will take days to subside,” National Weather Service meteorologist Bob Oravec said.  “And more is on the way.”

The rain will clear out for a few days, but much of the state will be blasted again over the weekend and into next week, Oravec said. He said water management officials are working feverishly to keep reservoirs from filling because they know more is coming. Some areas have seen flooding for the first time in many years, he said.

“It’s ironic, for years there was a drought and we never dreamed of trying to keep water out of those reservoirs,” Oravec said.

In Modesto, mobile home residents living along the Tuolumne River worked to clear out before the water rose above flood stage. It was not an easy job for some.

“The wheels haven’t turned in 20 years,” resident Raymond Lee told the Modesto Bee as he pulled his belongings from his mobile home. “I just got it to where it quit leaking, and if I pull it, it will leak again,” he told the news organization.

The storms even battered portions of Nevada. The weather service issued a flash flood warning for Dayton, Nev., on Tuesday, where authorities said they feared a dam might break and send 2 to 4 feet of water into low-lying areas.

“Currently there are no homes or property threatened,” Page said. “There is potential that could change in the next few hours.”

In Monterey County, rising waters in the Carmel River, Santa Rita Creek and other waterways forced an evacuation of several communities. In Salinas, about 100 miles south of San Francisco, a mandatory evacuation remained in effect for 1,000 people. Bolsa Knolls community resident George Quintero said floodwaters at one point reached his waist.

“I thought we would be floating,” he said.

In San Joaquin County, a levee breach on the San Joaquin River forced the evacuation of 500 residents. Responders halted the breach and workers hoped to stabilize the levee, but the evacuation order remained in place Tuesday, the county Office of Emergency Services said.

Hundreds of other residents in the region fled rising waters. In Spring Valley, about 2,000 people were cut off when two entrance roads were blocked by flooding and mudslides, Lake County Sheriff Brian Martin said.

“Our deputies are basically hiking in and hiking out,” Martin said.

Winds were howling. A gust of 199 mph was measured atop Ward Mountain at the Alpine Meadows ski resort late Monday evening, the weather service said. The ski area closed because of avalanche danger and continuing high winds, which averaged over 100 mph Tuesday morning.

Some good news came from Lake Oroville: The water level there is expected to peak 45 feet below capacity by early Wednesday before the level begins dropping once again, Department of Water Resources Director Bill Croyle said. Authorities had ordered an emergency evacuation more than a week ago as a spillway threatened to crumble.

Meteorologists placed part of the blame on atmospheric rivers — ribbons of water vapor extending thousands of miles from the tropics to the western USA. They fueled the massive rainstorms and subsequent floods that have battered California and much of the West Coast for weeks.

Although the storm eased Tuesday, the weather service warned: “forecast models are now hinting at a return to unsettled conditions late in the week and into the upcoming weekend.” Translation: Cool, wet weather for central California.