Shares
National Park Service police are investigating after a giant "Refugees Welcome" banner was illegally attached to the Statue of Liberty on Tuesday.

The 3ft by 20ft banner was placed across the observation deck on statue’s pedestal on Liberty Island, New York, Joinfo.com reports with reference to the BBC.

The banner was removed by park rangers a little more than an hour later. 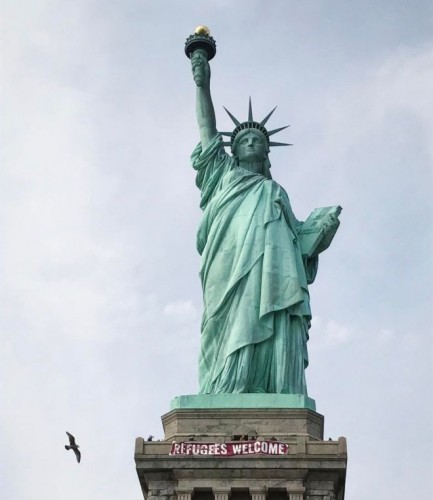 It happened on the day that the Department of Homeland Security announced expanded immigration enforcement policies.

In an email to local news station NBC 4 New York, an entity calling itself the Alt Statue of Liberty claimed responsibility.

“We have no formal group, just private citizens who felt like we needed to say something about the America we believe in,” the email reportedly stated.

The stunt quickly became a popular topic of debate on social media, with Twitter users suggesting that the Statue of Liberty itself represents a nation that welcomes refugees.

It comes as the Trump administration announced a plan on Tuesday to widen the net for deporting illegal immigrants to the US.

Mr Trump is also expected this week to announce a revised executive order aimed at cracking down on immigration after a previous order was suspended by the courts.