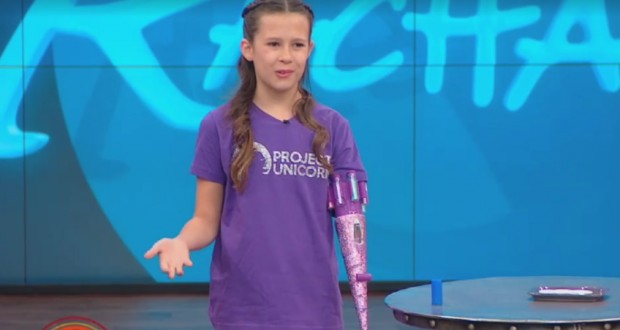 11-year-old inventor, Jordan Reeves, designed and created a prosthetic arm that shoots out glitter, according to Mashable.

The arm itself is mostly 3D printed, and uses compressed air to shoot out sparkles. Pretty awesome. Her finished invention was presented to the judges of Shark Tank on TV show Rachael Ray back in January, and has been impressing people on social media ever since.

She said thinks it should retail for “four dollars” — although the panel of judges thinks she should sell it for much, much more.

“You could sell it for a hundred dollars or more,” judge Robert Herjavec said. “And I know parents that would hate that, and that means kids will really love it,” added fellow judge Daymond John. Gotta love kids toys, hey.

Reeves, who hails from Columbia, Missouri has been inventing since the age of 10. Her other inventions include a glitter blaster and a paper towel puller. Reeves was born with a left arm that stops above the elbow.

Project Unicorn was designed at a camp called Superhero Cyborgs, which is organised by design education firm KidMob. The camp allows kids between the ages of 10 to 15 to design and build their own body modifications. Epic.