Home / US / Kansas shooting: India shocked after national killed in US

Kansas shooting: India shocked after national killed in US

Shares
India has expressed shock after the fatal shooting of an Indian national in the US, amid reports that the attack may have been racially motivated. 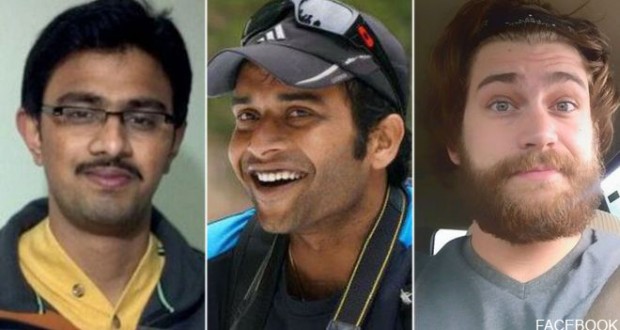 Srinivas Kuchibhotla died shortly after Wednesday’s attack at a bar in Olathe, Kansas. His friend Alok Madasani, also from India, and an American were hurt, the BBC reports.

Adam Purinton has been charged with premeditated first-degree murder.

The killing dominated news bulletins in India and social media, where some blamed Donald Trump’s presidency.

Speaking at a news conference, she described the US as “the country that he loved so much” and called the shooting a “hate crime”.

White House spokesman Sean Spicer said that any loss of life was tragic but that it would absurd to link what had happened to Mr Trump’s rhetoric.

The FBI is now investigating possible motives for the crime at Austins Bar and Grill, with race among them. Witnesses said that just before opening fire the gunman shouted: “Get out of my country.”

A barman also told local media that the attacker used racial slurs before the shooting on Wednesday night.

Mr Kuchibhotla, 32, and Mr Madasani, also 32, were engineers at US technology company Garmin. Both studied initially in India and later for postgraduate degrees in the US.

Mr Madasani has now been released from hospital.

The other injured man, Ian Grillot, 24, said he was shot while intervening to try and stop the violence.

Speaking from his hospital bed, he brushed aside suggestions that he was a hero.

“I was just doing what anyone should have done for another human being,” he said.

The suspect allegedly fled on foot and was arrested five hours later at a restaurant just over the state border, 80 miles (130km) away in Clinton, Missouri.

He told a bartender there that he had just killed two Middle Eastern men, the Kansas City Star reports, without naming its sources.

Mr Kuchibhotla was from the Indian city of Hyderabad. His parents, Madhusudhan Rao and Vardhini Rao, were too stunned by news of his death to comment, the Associated Press reported.

After the shooting, Indian actor Siddharth tweeted to his 2.6m followers: “Don’t be shocked! Be angry! Trump is spreading hate. This is a hate crime! RIP #SrinivasKuchibhotla.”

For Sunayana Dumala, the grief of losing the man she loved is still raw.

“Only good things happen to good people,” was a mantra her husband Srinivas Kutchibhotla used to utter.

Since his fatal shooting on Wednesday, these words are hard for Sunayana to comprehend.

As she addressed a news conference in Olathe, the place she’s made home, she revealed her concerns about living in the United States, telling the room she had experienced racism in the past.

She called on the US government to do more to stop hate crimes.

It’s still unclear what caused her husband’s killer to pull the trigger. But this loss has left Sunayana and her friends and family questioning their place in the United States.

Indian consular officials have been sent to Kansas City to meet Mr Madasani and arrange the repatriation of Mr Kuchibhotla’s body.

The Indian consul general, Anupam Ray, told the BBC: “We would like to reassure the Indian community that this is being personally monitored at the highest level by Indian External Affairs minister Sushma Swaraj from Delhi.”

The US Embassy in Delhi decried the shooting.

“The United States is a nation of immigrants and welcomes people from across the world to visit, work, study, and live,” said Charge d’Affaires MaryKay Carlson.

“US authorities will investigate thoroughly and prosecute the case, though we recognise that justice is small consolation to families in grief.”

Mr Purinton, 51, was extradited to Kansas on Friday.

A crowd funding campaign set up by a friend to support Mr Kuchibhotla’s family has already raised more than $493,000 (£396,000) after donations poured in from thousands of people.

A separate donation appeal to pay for Mr Grillot’s medical costs has raised more than $214,000.

A vigil held at a Baptist church close to Austins Bar and Grill brought together many people from the local Indian community for an inter-faith service.

It ended with everyone singing Stand By Me and holding candles, our correspondent Rajini Vaidyanathan reports.

The attack has drawn a strong response in the Indian media, with most calling it a hate crime. “The president now has blood on his hands”, one headline said.

The same outlets have also lauded the American man who tried to help the engineers and suffered bullet wounds. He’s been called a hero.

Many in the Indian community in the US have voiced concerns over Mr Trump’s diatribes against Muslims and foreign workers accused of stealing American jobs. Such statements have led to anxiety among the thousands of Indian technology workers who have come to the US.

There’s generally been a belief in the community that Indians have gelled well into mainstream America and will not be targeted. That belief may have been shaken, if not totally shattered, by this shooting.