Shares
About half of Americans believe that Congress should investigate whether Donald Trump's presidential campaign had contact with the Russian government in 2016, while only a quarter say that lawmakers should not probe the issue, according to a new NBC News/ Wall Street Journal poll. 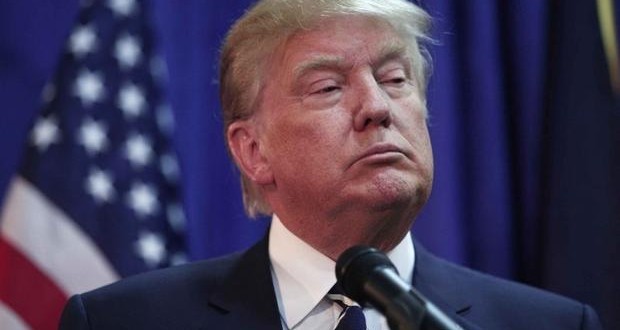 The new poll, conducted February 18-22, shows that 53 percent of the American public wants Congress to look into the alleged communications, while 25 percent disagree and 21 percent say they don’t have an opinion, NBC News reports. 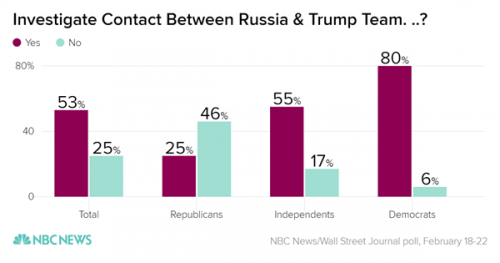 A similar share — 54 percent — believe that Congress should look into Russian interference in the election generally, while 29 percent disagree. 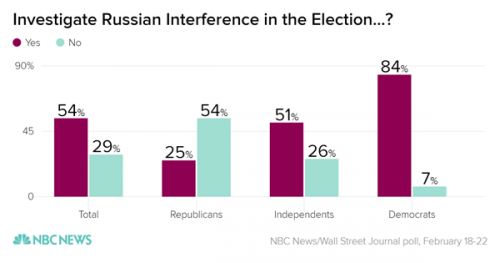 The findings come as Trump’s administration battles leaks from the intelligence community that have pointed at contacts between Trump allies and Russians, some with links to the Kremlin. On Friday, the administration pushed back on reports that the FBI refused a White House request to publicly deny news stories about the alleged communications.

The FBI and CIA also assessed last year that Russia intervened in the 2016 election in part to aid Trump’s campaign.

Those who advocate for a Congressional investigation of possible ties between Trump’s team and the Russian government include 80 percent of Democrats, 55 percent of independents and 25 percent of Republicans.

The partisan breakdown is nearly identical among those who want Congress to probe Russian interference in the election more broadly. That includes eighty-four percent of Democrats, 51 percent of independents and 25 percent of Republicans.

Bipartisan members of the Senate Intelligence Committee and a Senate Judiciary Subcommittee have pledged to look into possible interactions between Trump associates and the Russian government, while the Trump administration and many Republicans in relevant Committees in the House have suggested that the probes should instead focus on rooting out the sources of the leaks. 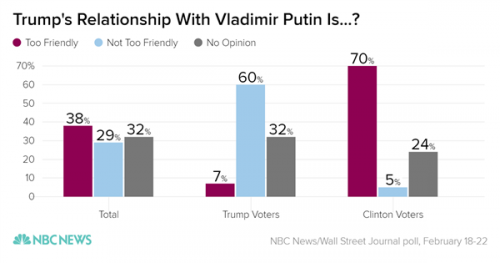 But just seven percent of Trump supporters say that Trump and Putin are too cozy, while 70 percent of Clinton voters say the same.