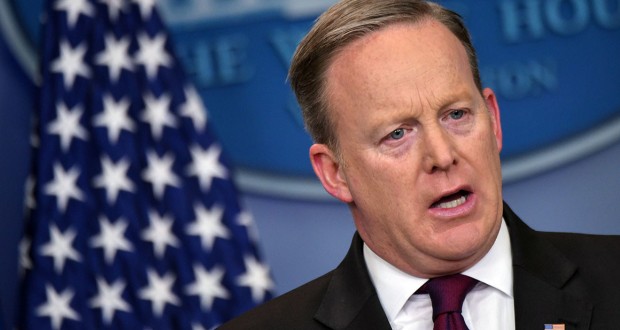 According to Politico, press secretary Sean Spicer is cracking down on leaks coming out of the West Wing, with increased security measures that include random phone checks of White House staffers, overseen by White House attorneys.

The push to snuff out leaks to the press comes after a week in which US President Donald Trump strongly criticized the media for using unnamed sources in stories and expressed growing frustration with the unauthorized sharing of information by individuals in his administration.

Last week, after Spicer became aware that information had leaked out of a planning meeting with about a dozen of his communications staffers, he reconvened the group in his office to express his frustration over the number of private conversations and meetings that were showing up in unflattering news stories, according to sources in the room.

Upon entering Spicer’s office for what one person briefed on the gathering described as “an emergency meeting,” staffers were told to dump their phones on a table for a “phone check,” to prove they had nothing to hide.

Spicer, who consulted with White House counsel Don McGahn before calling the meeting, was accompanied by White House lawyers in the room, according to multiple sources.

There, he explicitly warned staffers that using texting apps like Confide — an encrypted and screenshot-protected messaging app that automatically deletes texts after they are sent — and Signal, another encrypted messaging system, was a violation of the Presidential Records Act, according to multiple sources in the room.

The phone checks included whatever electronics staffers were carrying when they were summoned to the unexpected follow-up meeting, including government-issued and personal cellphones.

Spicer also warned the group of more problems if news of the phone checks and the meeting about leaks was leaked to the media. It’s not the first time that warnings about leaks have promptly leaked. The State Department’s legal office issued a four-page memo warning of the dangers of leaks, and that memo was immediately posted by The Washington Post.

But with mounting tension inside the West Wing over stories portraying an administration lurching between crises and simmering in dysfunction, aides are increasingly frustrated by the pressure-cooker environment and worried about their futures there.

Within the communications office, the mood has grown tense. During a recent staff meeting, Spicer harshly criticized some of the work deputy communications director Jessica Ditto had done, causing her to cry, according to two people familiar with the incident. “The only time Jessica recalls almost getting emotional is when we had to relay the information on the death of Chief Ryan Owens,” Spicer said, referring to the Navy SEAL killed recently in action in Yemen.

Ditto also denied the accounts. “This is 100 percent not true,” she said Sunday after the incident was reported. “Sean and I have a great working relationship.”

Spicer declined to comment about the leak crackdown, the report said.

It should be recalled that Trump said he won’t attend White House Correspondents Dinner.