Shares
Former US President George W Bush has said a free press is "indispensable to democracy" during a rare TV interview. 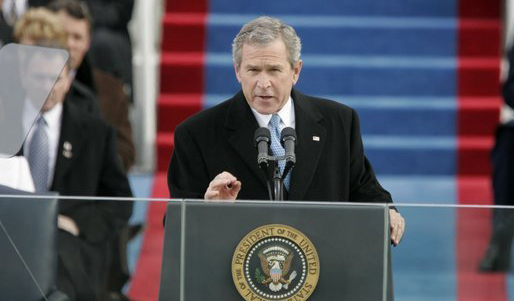 He told NBC’s Today program a free media was needed to call those in power to account, Joinfo.comreports with reference to the BBC.

Mr Bush also said that the question of any links between associates of Donald Trump and the Russian government “does need to be answered”.

President Bush was speaking to Today’s Matt Lauer ostensibly to promote his new book – a collection of portraits of military veterans he has met.

Mr Bush said: “Power can be very addictive and it can be corrosive, and it’s important for the media to call to account people who abuse their power.”

Mr Trump has branded some parts of the media as “enemies of America”.

Mr Bush said he had spent time in office trying to convince Russian President Vladimir Putin that he needed an independent media.

“It’s kind of hard to tell others to have an independent, free press when we’re not willing to have one ourselves,” Mr Bush said.

‘We all need answers’

Mr Trump’s latest brush with the media was to announce that he was pulling out of the traditional White House Correspondents’ Association dinner on 29 April.

And on Friday, the BBC, CNN, Buzzfeed and the New York Times were among media groups barred from an off-camera informal briefing held by White House Press Secretary Sean Spicer.

Mr Bush was also asked about whether any links between Trump aides and Russian officials during a presidential election campaign that was dogged by allegations of Russian hacking attacks should be formally investigated.

“I think we all need answers… I’m not sure the right avenue to take. I am sure, though, that that question needs to be answered.”

He said only that “I am for an immigration policy that is welcoming and upholds the law”, but also stressed that “people should be able to worship who they want to or not at all”, calling this the “bedrock of our freedom”.

The former president was asked to compare the divisions today with those he faced after his election in 2000, with the contentious and disputed defeat of Al Gore.

He said: “It’s hard to compare times. One thing is for certain the job’s a tough job. Everybody looks at the presidency one way and when they get into office, they find out there’s a reality to the job.”

But he said Mr Trump had only had one month in office. “You have to take the man for his word that he wants to unify the country,” Mr Bush said.

The former president was promoting his book Portraits of Courage: A Commander in Chief’s Tribute to America’s Warriors, proceeds of which will go to help post-9/11 veterans and their families transition to civilian life.