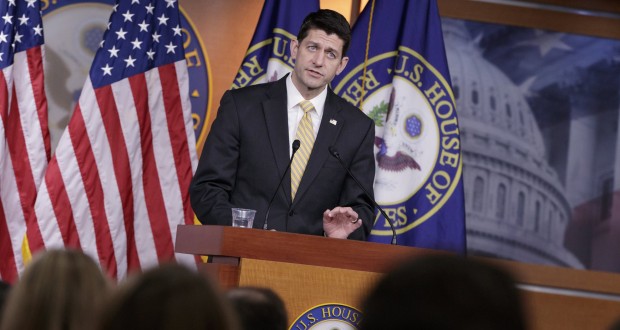 After weeks of promises, Republicans unveiled a bill to repeal the Affordable Care Act (ACA) with a plan that shrinks the government’s role in healthcare, and could leave more Americans without health insurance, Joinfo.com reports with reference to The Guardian.

Called the American Health Care Act, the bill would eliminate the individual mandate, which required Americans to have health insurance or pay a fine; cut the number of people insured under Medicaid; and allow insurance companies to charge the elderly up to five times more than the young.

The bill would require insurers to cover so-called pre-existing conditions, but would allow them to add a 30% surcharge to premiums if people go without insurance for too long.

“The American Health Care Act is a plan to drive down costs, encourage competition, and give every American access to quality, affordable health insurance,” said House speaker Paul Ryan. “It protects young adults, patients with pre-existing conditions, and provides a stable transition so that no one has the rug pulled out from under them.

“Working together, this unified Republican government will deliver relief and peace of mind to the millions of Americans suffering under Obamacare. This will proceed through a transparent process of regular order in full view of the public.”

Patient advocacy groups were quick to attack the plan, pointing out that it is a far cry from plans promised by Donald Trump.

“This bill reveals those promises for what they always were: empty campaign rhetoric. The president doesn’t seem to understand that millions of lives are at stake here. We all deserve better.”

The bill comes as people have turned out nationwide to town halls in protest of repeal of the ACA, as the law’s popularity reached an all-time high. At one town hall in New Jersey, one constituent told Republican representative Leonard Lance that “when you make these decisions that affect the rest of us, it hurts many people.”

Others, such as Senator Marco Rubio, avoided town halls altogether, telling one demonstrator that “people get rude and stupid”. By Monday evening, Democrats had already begun branding the new bill.

“Trumpcare doesn’t replace the Affordable Care Act, it forces millions of Americans to pay more for less care,” said Democratic Senate minority leader Chuck Schumer. “This plan would cut and cap Medicaid, defund Planned Parenthood, and force Americans, particularly older Americans, to pay more out of pocket for their medical care all so insurance companies can pad their bottom line. It cuts taxes on the rich to make middle class families pay more. ”

“This bill is a giveaway to the wealthy and insurance companies at the expense of American families, and Senate Democrats will work hard to see that it is defeated.”

“President Trump looks forward to working with both chambers of Congress to repeal and replace Obamacare,” Spicer said.

The release of the House bill was accompanied by an all-out publicity effort by congressional conservatives. Kevin Brady of Texas and Greg Walden of Oregon, the two committee chairmen with oversight of the bill, went on Fox News shortly after the draft was released to hail its benefits.

Walden, the chair of the House energy and commerce committee, hailed the bill as “the biggest entitlement reform probably in at least the last 20 years, certainly since the Clinton days, when they reformed welfare”. However, he made clear that the current legislation would continue aspects of the ACA, better known as Obamacare, including the end of lifetime caps on coverage as well as the ability for a adult child to stay on their parents’ healthcare plan until the age of 26.

But several Republican senators remained skeptical. Republicans have a 52-48 majority in the Senate. Assuming all Democrats hold firm in opposition to the Republican bill, three defections would be enough to deny Obamacare repeal a majority.

The legislation has not been fully scored by the congressional budget office and debate in the House will proceed without members having a clear accounting of the mechanics of implementing it. Senator Bill Cassidy of Louisiana, who has proposed his own Obamacare alternative, expressed skepticism about the lack of this information.

“What I would say is I would want to know the score, what is the coverage, what is the cost absolutely,” said the Louisiana Republican. He added that proceeding without this policy detail “seems problematic”. Cassidy added: “I am trying to be diplomatic.”

Other issues in the Senate for the House bill include the proposal to roll back the expansion of Medicaid under the Affordable Care Act. Four Republicans senators, Rob Portman of Ohio, Cory Gardner of Colorado, Shelley Moore Capito of West Virginia and Lisa Murkowski of Alaska wrote publicly that they could not support the draft bill’s current provisions to eliminate the expansion of a program that provides healthcare to the working poor.