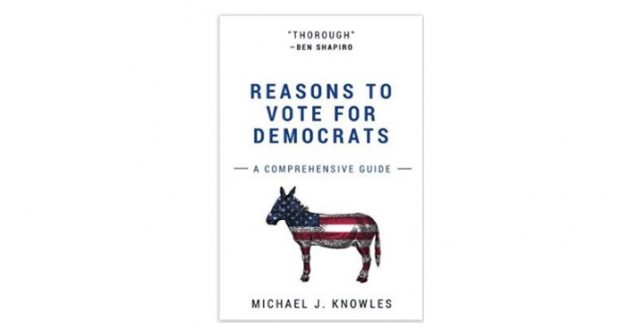 “Reasons to Vote for Democrats: A Comprehensive Guide”, published Feb. 8, is described as the “most exhaustively researched and coherently argued Democrat Party apologia to date” and “a political treatise sure to stand the test of time”, Joinfo.com reports with reference to Washington Post.

Its cover is a stately white and features the image of a donkey colored by the American flag. An endorsement by Daily Wire editor in chief Ben Shapiro calls the book “thorough.”

“If Democrats copied and pasted the contents of this book into their national platform they could become unstoppable,” read one user review.

“Exhaustive, yet concise, treatment of the reasons to vote for Democrats. I thoroughly enjoyed this book and recommend it as a teaching tool for any potential voter. This book is truly unparalleled,” read another.

“Riveting from cover to cover,” read a third.

A peek inside finds a quote from Thucydides, and a table of contents with such lofty chapters as “Foreign Policy,” “Civil Rights” and “Homeland Security.”

What follows next are roughly 260 blank pages, save for the book’s title printed atop each. The list price is $9.99.

This shouldn’t come as a surprise. The Daily Wire, after all, is a deeply conservative website, featuring articles such as “Illegal Immigrant Charged With Beheading Own Mother With Butcher Knife” and “The ‘Trump Is A Russian Plant!’ Case Is Falling Apart. Here Are 4 Things You Need To Know.”

On Thursday, Knowles appeared on “Fox & Friends” and said: “What’s really great about this book, you can go cover-to-cover in about 15, 20 seconds.”

“It took a very long time to research this book,” he said. “I’ve been observing the Democratic Party for at least 10 years now and when I observed their record and reasons to vote for them — on reasons of economics or foreign policy or homeland security or civil rights and so on — I realized it was probably best to just leave all the pages blank.”

“When I started researching the book and going through this exhaustive study process, at first I turned to the 2012 Democratic National Convention, and it turned out they were deciding whether or not to include God in their party platform,” Knowles said. “And the Democrats booed God. That’s not good. So I decided probably if I’m going to make a good case to vote for Democrats, probably just leave that chapter blank.”

During the vote, boos can be heard, which led conservative news outlets such as Fox to run headlines such as “Democrats Boo God, Jerusalem.”

Although it might be a novelty item, the book seems to be flying off the shelves.

Not wanting to miss out on the action, the Democrats appear to have responded with a missive of their own.

“Reasons to Vote for Republicans: A Captivating Interpretation,” by Char Daley, just published.

You can guess what’s inside.