Shares
Irish Prime Minister Enda Kenny had a dig at Donald Trump right in front of him, by giving a speech about how great immigration was – and is – for the US. 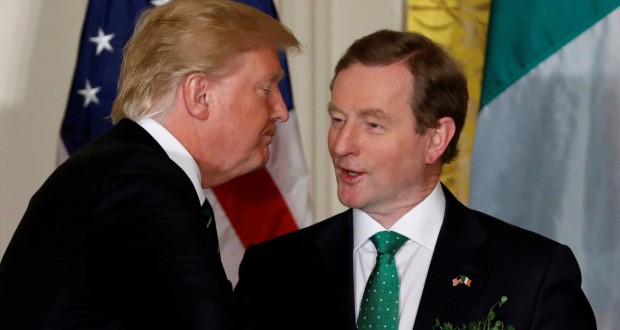 Speaking in the East Room of the White House, as part of St Patrick’s Day celebrations in the US, Irish Prime Minister Enda Kenny spoke directly about Irish immigration throughout the country’s history, Joinfo.com reports with reference to Metro.

He said: ‘It’s fitting that we gather here each year to celebrate St Patrick and his legacy.

‘He too, of course, was an immigrant – and though he is of course the patron saint of Ireland, for many people around the globe he’s also a symbol of, indeed the patron of, immigrants.

‘Here in America, in your great country, 35 million people claim Irish heritage, and the Irish have contributed to the economic, social, political, and cultural life of this great country over the last 200 years.

‘We came, and we became Americans. We lived the words of John F. Kennedy long before he uttered them. We asked not what America could do for us, but what we could do for America – and we still do.’

Kenny also delivered another speech to a luncheon at the US Capitol, in which he was a bit more direct with the US President.

Urging Trump to help those in the country illegally, Kenny said: We would like this to be sorted. It would remove a burden of so many people that they can stand out in the light and say, “Now I am free to contribute to America as I know I can”.

‘And that’s what people want.’

He also told Trump to think about providing more work visas ‘for young people who want to come to America and work here’. According to some estimates, there are tens of thousands of Irish immigrants living in the US illegally.

Kenny also told Trump that Ireland was a ‘committed member’ of the EU during a private reception at the White House – perhaps a further dig at Trump’s backing of Brexit.

The White House has been hosting St Patrick’s Day events since the 1950s, and they have become an important standing engagement for Ireland.