Shares
The F.B.I. director, James B. Comey has announced that the agency is investigating whether members of President Trump’s campaign colluded with Russia to influence the 2016 election. 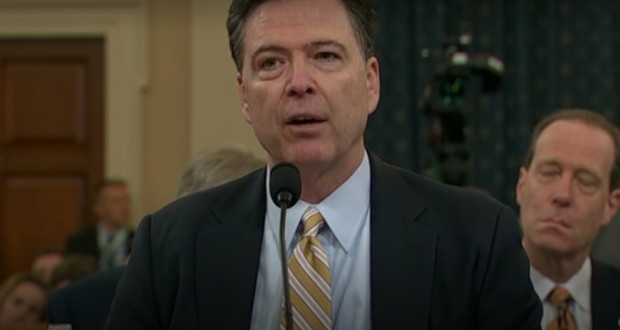 The F.B.I. director, James B. Comey, took the extraordinary step on Monday of announcing that the agency is investigating whether members of President Trump’s campaign colluded with Russia to influence the 2016 election, Joinfo.com reports with reference to The New York Times.

Mr. Comey’s testimony before the House Intelligence Committee created a treacherous political moment for Mr. Trump, who has insisted that “Russia is fake news” that was cooked up by his political opponents to undermine his presidency. Mr. Comey placed a criminal investigation at the doorstep of the White House and said officers would pursue it “no matter how long that takes.”

Joined by Adm. Michael S. Rogers, the director of the National Security Agency, Mr. Comey also dismissed Mr. Trump’s claim that he was wiretapped by his predecessor during the campaign, a sensational accusation that has served as a distraction in the public debate over Russian election interference. Taken together, the two provided the most definitive statement yet that Mr. Trump’s accusation was false.

The New York Times and other news organizations have reported the existence of the investigation into the Trump campaign and its relationship with Russia, but the White House dismissed those reports as politically motivated and rallied political allies to rebut them. Mr. Comey’s testimony on Monday was the first public acknowledgment of the case. The F.B.I. discloses its investigations only in rare circumstances, when officials believe it is in the public interest.

“This is one of those circumstances,” Mr. Comey said.

Mr. Comey said the F.B.I. was “investigating the nature of any links between individuals associated with the Trump campaign and the Russian government, and whether there was any coordination between the campaign and Russia’s efforts.”

Counterintelligence investigations are among the F.B.I.’s most difficult and time-consuming cases, meaning an investigation could hang over the Trump administration for years even though such inquiries rarely lead to criminal charges.

The White House dismissed most of Mr. Comey’s testimony, saying there was no coordination between the Trump campaign and Russia and so there was nothing to investigate. Sean Spicer, the White House press secretary, said the more pressing issue was who disclosed classified information about Mr. Trump’s advisers to journalists, suggesting that they might have been former members of the Obama administration.

American officials have said that they have so far found no proof of collusion between the Trump campaign and Russia, but current and former officials say they have uncovered evidence that Mr. Trump’s associates were in repeated contact with Russian officials — including people linked to Russian intelligence.

Roger J. Stone Jr., a longtime adviser to Mr. Trump, has acknowledged communicating with Guccifer 2.0, an online persona believed to be a front for Russian intelligence officials involved in disseminating hacked Democratic emails. Mr. Stone has denied that there was anything improper about the contact, and he was one of many, including political operatives and journalists, to communicate with the hackers.

Last July, the month that WikiLeaks began releasing the hacked emails, Carter Page, a foreign policy adviser to Mr. Trump, visited Moscow for a speaking engagement. Mr. Page has declined to say whom he met there, but he has said they were mostly scholars.

Michael T. Flynn, a Trump campaign adviser who went on to be his national security adviser, was paid more than $65,000 by companies linked to Russia in 2015, including an American branch of a cybersecurity firm believed to have connections to Russia’s intelligence services, according to congressional investigators. Mr. Flynn was forced to resign after misrepresenting his conversations with the Russian ambassador to the United States.

Mr. Comey said Russia used a murky network of government officials, oligarchs, business leaders and others close to Mr. Putin to gather intelligence. But he repeatedly sidestepped specific questions about Mr. Trump’s advisers, and acknowledged that American citizens sometimes did not realize they were talking to foreign agents. He said the existence of an investigation did not mean the F.B.I. would ever prove wrongdoing.

“Is it possible that all of these events and reports are completely unrelated and nothing more than an entirely unhappy coincidence?” said Representative Adam B. Schiff of California, the intelligence committee’s top Democrat. “Yes, it is possible. But it is also possible, maybe more than possible, that they are not coincidental, not disconnected and not unrelated.”

Mr. Comey, testifying for more than five hours, said there was no evidence that Russian hackers had changed any votes in the election. The statement was quickly spun by the White House, which posted that clip of Mr. Comey’s testimony on Twitter.

The NSA and FBI tell Congress that Russia did not influence electoral process. pic.twitter.com/d9HqkxYBt5

But later in the hearing, when Mr. Comey was read the tweet by Representative Jim Himes, Democrat of Connecticut, the F.B.I. director made it clear that that was not what he had said.

“We’ve offered no opinion, have no view, have no information on potential impact because it’s not something we looked at,” Mr. Comey said, clarifying that the intelligence community is examining what Russia did to interfere with the election, not the effect of that interference.

Mr. Comey did not say when he expected his investigation to end or whether he planned to make the results public, prompting Republicans to complain that prolonging it would keep a cloud over the White House.

“The longer this hangs out there, the bigger the cloud,” said Representative Devin Nunes of California, the Republican chairman of the Intelligence Committee. “If you have evidence, especially as it relates to people working in the White House or in the administration, that is information we really should know.”

Mr. Trump began the day with Twitter posts denying any collusion with Russia and criticizing leaks of classified information about the investigation. By midday, the White House was citing Mr. Comey’s testimony to suggest that members of the Obama administration had coordinated leaks against Mr. Trump.

Republicans on the Intelligence Committee made similar allegations, using their questions to Mr. Comey to criticize the news coverage about the Russia investigation and chastise government officials who speak anonymously to journalists. Mr. Nunes said he was particularly concerned about the anonymous sources who revealed to journalists that some of Mr. Trump’s associates were being investigated.

The White House has insisted that there is nothing left to investigate about Russia and has instead asked Congress to look into Mr. Trump’s claims that he was wiretapped by President Barack Obama. Mr. Trump made those allegations in a flurry of Twitter posts early this month.

The White House has stood by his accusation, even in the face of conclusions from all corners of the government that it is false. On Tuesday, Mr. Comey, who had asked the Justice Department if it would make a public statement refuting Mr. Trump’s claim, summarily dismissed it.

“I have no information that supports those tweets, and we have looked carefully inside the F.B.I.,” Mr. Comey said, adding that the Justice Department also had no evidence.

Those assurances seemed unlikely to change the White House’s position.

Asked Monday whether, in light of Mr. Comey’s testimony, the president stood by his assertion that he was wiretapped, Mr. Spicer said that he did.