Shares
There must be something in the water at one Iowa fire station. 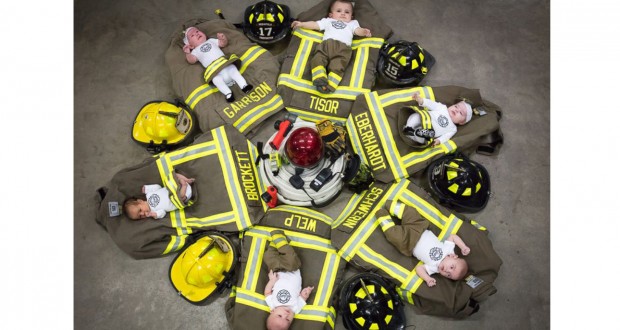 “We didn’t have a plan to do this,” Captain Troy Garrison, who welcomed a daughter named Emma four months ago, with his wife Dina, told ABC News. “But I think the stars just kind of aligned and the timing for us individually as families just worked out.”

Brockett, who’s been volunteering at the fire station since 2001, and his wife Megan were the last to tell the group they were expecting. Three weeks ago, the two welcomed Neva.

And although Brockett said he and his wife of nearly four years were “really happy” for the other couples, it was hard as they were privately going through in vitro fertilization.

“We were just really praying that we’d get to be part of that,” he said. “And then finally we got to come out [and say] ‘We’re pregnant.’ We were the last ones so … it was fun. We were happy.”

Adam Welp, who’s been volunteering for three years, told ABC News he was just happy to welcome all of the new fathers to the fold.

He and his wife of four years, Katie, welcomed their second child, Kalvin, six weeks ago. Welp, 29, is also a father to a 2-year-old daughter named Kolby.

“For me, it’s kind of fun because a couple of the guys — like Tom and Troy — they’re a little older than me but this was their first child,” Welp said. “It was fun to be younger, but showing them the ropes.”

The first time the six firefighters got their new children together was at a photo shoot with local photographer, Debbie Brissey.

“It was a blast,” Welp recalled, adding that his wife created the babies’ skirts and trousers on her maternity leave thanks to “some old retired gear.”

The firefighters, who are among 25 volunteers at the station, said their dedication to their community won’t change, and they already have a plan just in case they’re all called to fight a fire and they can’t find a babysitter.

“The plan is just for everyone to go to the fire station and hopefully one of the wives will be there to hand our kids off to,” Brockett said.

Still, putting on their gear will be harder for some.

“I remember the first time I went [to fight a fire] after having my daughter,” Garrison recalled. “But you get on the truck and recheck your priorities.

“We still have a job to do,” he added. “The public depends on us to do our job the best we can.”